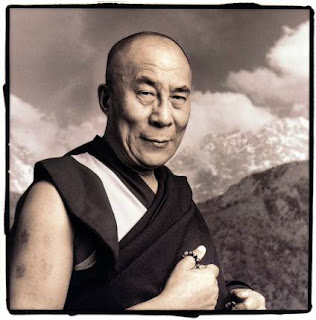 I had this dream a few weeks ago, and I thought about writing it down.

And then that evil thing that author Stephen Pressfield calls the "Resistance" thwarted me, and I put it off.

But no longer.  This dream deserves to preserved in writing.  You'll see why in a moment.

I should also add that it probably deserves to be analyzed by someone who does that sort of thing.

At any rate, here is the dream in all of it's surreality.

I am in a cab in a city, which I think is Chicago---at least that's what it feels like.  It's dark and the lights of the city are flashing by as we speed through the streets.  It looks like it has been raining, because the streets are sort of glistening like they do after it rains and the clouds move away.


I look over at the seat next to me in the cab and I realize that I am sitting next to the Dalai Lama.  This seems odd to me even in the dream, but I can't think of anything to say.  The Dalai Lama smiles at me in that peaceful way that he has about him.  Suddenly the cab driver slams on his brakes and we sort of skid to a stop.  The Dalai Lama reaches out and puts his hand on my chest to keep me from lurching forward.


When the cab begins driving again we sort of laugh nervously and I tell the Dalai Lama "Thank you."  He says something, but I don't really catch it.  I just know that it feels comforting and kind.


I discover that we are outside of a restaurant that appears to be crowded.  We are immediately ushered in by the hostess, who introduces us to the maitre'd.  He happens to be one of my church members, who I dearly love.  I am surprised by this, but no one else seems to be, so I just go along with it.


"I was waiting for you to get here," he tells us.  The Dalai Lama asks where the restroom is located and one of the wait staff escorts him toward it.  My church member turns to me and says, "Dar has passed away."


I nod.  I have no idea who Dar is.  But he looks so sad that I don't know what to do.  He puts his hand on my shoulder and offers me a sad smile.  There are tears glistening in his eyes.  "When?" I ask, hoping that by delaying that something will remind me of who Dar is and if I, too, should be feeling sad.


My church member/maitre'd removes his hand from my shoulder and says to me, "Last night, don't you remember?"  I nod and murmur something about being so busy with the Dalai Lama that my mind must have wandered.


At that point the Dalai Lama returns, and instantly realizes that something is wrong.  "What has happened?" he asks me.  My church member speaks up, "Dar has passed away, Your Holiness."  The Dalai Lama's face changes and he looks at the ground for a moment.  "This is sad indeed," he says.


We all stand there looking sad and I am fighting inside to uncover any shred of memory that will give me a clue as to who the heck Dar is, and why it should matter to me.  The Dalai Lama puts his hands on my shoulders, facing me and looks unflinchingly and kindly into my eyes.


"I am truly sorry for your loss," he tells me.  And I can see that he is actually tearing up, just as my church member did.  "Thank you," I tell him.  And then I am struck by a sadness so deep and bruising that I feel as though I might fall down.


Then the Dalai Lama says something like, "It will be well."