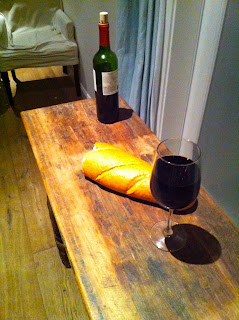 There are three kinds of people in this world.

1. People who have heard The Rev. Rob Bell throw down a sermon that blows their mind and calls them to faithfulness.

2. People who have seen The Rev. Rob Bell's ubiquitous NOOMA video series where he throws down some teaching that blows their minds and calls them to faithfulness.

If you are in the first two categories, you probably asked yourself while you watched or listened, "How in the world did he just do THAT?"  And then you sit there with your mind blown and your faithfulness stirring in a direction you did not expect.

And you wish you could preach/teach just like Rob.

Okay.  I admit, that last bit was pretty much just my baggage.

But I'll allow for the possibility that there might be others out there like me who would really love to get the chance to sit up close and personal and listen to Rob talk about the craft of preaching.

This past week, I had the chance to do just that.

And it was awesome.

Here are some of the things that Rob talked to us about regarding Preaching and the Creative Process:

He quoted Abraham Heschel, who said "I did not ask for success, I asked for wonder."

It is wonder, Rob told us, that is at the core of the creative process.  He told us, "It's awesome when you encounter someone who has wonder and awe not because they're naive, but because they have actually experienced."


Then Rob moved from the general to the specific.

"Collect things that spark ideas for you," he told us.  When you see something, or encounter someone that generates wonder, "get a name and a license plate number."

He told us about his file of things that have sparked something within him--a file that is actually stored in his garage.  As an example of what he collects, he told us of a moment when he was walking in downtown Grand Rapids in early Spring.  It was a sunny, warm day and some college-age guys had discovered a small patch of green grass near a busy intersection in the city to play frisbee.  Rob watched them for a moment, and then saw the frisbee soar over the outstretched hands of one of the guys and into the intersection where it was crushed by a huge truck.

Rob went and picked up all of the frisbee pieces and put them in a bag.  There was something there, he told us, that spoke to how quickly good things can go bad.  He said he didn't know when or if he would ever use that---but he had it in case he needed it.

Then he talked to us about focus.

He asked us if we had ever experienced a sermon without a focus.  We all nodded.  Some of us knew all too well what that was like, having preached a few of them.  Rob said it's sort of like "trying to land the plane, but you can't find the airport."

In the end, it's about the simplest things, the most basic approach.  Rob taught that we have multiple senses at our disposal, and we need to use them.  Use tangible, physical things that engage the congregation.  Let them touch, let them hear, let them do something that involves them in the creative process of the sermon while it's being preached.

And most of all keep it focused.  "You know you are on to something," Rob said, "when you are at the simplicity beyond complexity.  He reminded us that we are preaching to the plumber in the fourth row.  There needs to be a way in to the sermon for people who are living in the real world.

"Like a good song has a good melody," Rob asserted, "[your sermons] need a hook."

Here are some random quotes that Rob threw out as we talked about the preaching process:

"I did a sermon on the word 'that.'"
[Rob on spending six months teaching from John 3:16 word by word]


"Things that grab you - record them, remember them... get rid of your edit button, you can always chuck it at the last minute."
[Rob on working through the editing process for your sermon or other creative work]


"A cell phone does a really, really, really traumatic thing to the psyche... an instant ranking."
[Rob on what happens when you are creating and your cell phone rings which requires you to decide whether to answer it]


"Most emergencies aren't."
[In other words, there are going to be all kinds of things that threaten to tear you from your sermon prep and creative process... don't let them]


"I try to read books about things I know nothing about."
[When asked how he chooses what to read in order to stay creative]


"I love design sites that are just pure, unadulterated beauty."
[When asked what areas of the internet that he gravitates toward.  Rob indicated that he doesn't spend a lot of time on the Web, but does go to http://www.aether.hu/ quite a bit.]


"When you share something [personal], it belongs to everybody, it's no longer yours.  And if you keep doing that, you have little left."
[When asked what he thought of telling personal stories, or sharing stories about his family from the pulpit]


"A stage has implications.  When you step on a stage you are in a different medium than if you were just having coffee."
[Rob on what happens to the preacher in the act of preaching.]
2Days With Rob Bell church leaders pastoral leadership Pastoral Resources Preacher preaching Rob Bell