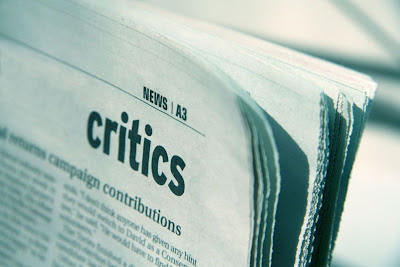 When Rob Bell released his book Love Wins, both he and his wife began to realize that their lives had fundamentally changed.  The firestorm of controversy that the book created, followed by the tidal wave of harsh criticism that was leveled at Rob both shocked and surprised them both.

The Southern Baptist Convention essentially anathematized him.
A flurry of books was produced to refute the "heresy" that Rob supposedly espoused in Love Wins.
John Piper, the renowned Baptist and scholar publicly renounced Bell with a dismissive tweet that simply said, "Farewell."

Then there were the bloggers who took to the Internet and said the most vile, hate-filled and unChristian things possible.  And I am talking about the Christian bloggers.

And throughout all of this, Rob never responded publicly.  He didn't take to the internet.  He held no press conferences other than the press that he did to promote the book.  There was an extended edition released for iBooks with videos of Rob talking more extensively about the content of Love Wins.  There was even a companion guide that was released full of content from scholars and pastors who affirmed Rob's questions and thoughts about salvation, Heaven, Hell and the Kingdom of God.

But Rob never once publicly defended himself.

This past week while I was at the 2Days With Rob Bell event, members of our group asked Rob why he had remained silent---why he had never defended himself or his work.

"Would it have made any difference?" he asked us in return.  "Would that change anything?  To me it's all Charlie Brown's mom, 'mwhahmwahmwah..."

Then he said, "I have apparently broken the rules of golf.  I'm playing tennis."  He said this to mean that he's no longer "playing" the same games as his critics any longer---no longer concerning himself with the need to be "theologically correct."

Rob would later tell us, "I've given my life to people who can't find Jesus in the regular Jesus packages."

"My calling," he told us, "is to not be more Orthodox-er than you---or the Orthodox-est."  His calling was to share the Good News with as many people as possible---but especially the people who stopped believing that the "good news" being preached by the majority of Christians isn't really good news for them.

Then he asked us a question:  "Can you totally violate---really publicly---basic Jesus stuff in the name of Jesus?"

When he was later joined by his wife Kristin for some Q&A she revealed that no one had ever really been mean to them to their face.  "It was all on the Internet," she told us, "anonymously."

Rob didn't have a lot of love for the bloggers who spewed hate about him.  He referred to them several times as "snipers on every roof."  They are, he told us, the kind of people who vomit hate in their mom's basement--safe from actual conversation and dialogue.

"When Jesus said 'You brood of vipers!' [to the Pharisees], he's not blogging," he said dryly, "he's at dinner."

In the end, Rob told us, he was content to leave the whole thing to God.  "I have great confidence," he said, "that truth is buoyant and it floats."


Our conversation eventually shifted to Rob's prepared thoughts on handling criticism--something that he obviously knows a great deal about.

Rob then took us to 2 Samuel 16 for a study of the story of King David and a man named Shimei.  David had just experienced some of the most devastating things that a man could face.  His son Absalom has betrayed him and declared himself king, David has been forced to flee his capital city and his life is in danger.

And then as he is fleeing, he runs into this guy Shimei, who begins throwing stones at him and saying, "Get out you man of bloodshed [murderer], and worthless fellow [trash]! The LORD has returned upon you all the bloodshed of the house of Saul, in whose place you have reigned; and the LORD has given the kingdom into the hand of your son Absalom. And behold, you are taken in your own evil, for you are a man of bloodshed!'"


Shimei is a Benjamite---of the same tribe as Saul.  Rob pointed out that when your relative is on the throne, your status is elevated.  "When your brother is the manager of Chuck-E-Cheese," he said, "you get free tokens."   Shimei had a lot invested in how thing hads been.  David was a disrupting agent.  You get the feeling that Shimei has just been waiting for this moment for a long time.

Rob pointed out some other things.  David had men on the right and the left of him as he marched away from Jerusalem.  Sometimes, Rob said, "you can't build a wall high enough to escape criticism."  It still lands on you.

One of David's bodyguard offers to go over and to kill Shimei, who he calls a "dead dog."  David stops him and then says: "My son, who is of my own flesh, is trying to take my life. How much more, then, this Benjamite! Leave him alone; let him curse, for the LORD has told him to. It may be that the LORD will see my distress and repay me with good for the cursing I am receiving today."

"What do I do when I am criticized," Rob asked.  The first thing to do, he told us, is not to defend yourself, but to start asking questions.  There is always a back story.  There is always something going on with the other person.  Sometimes it's not about you, but what you represent.


David says that the curse may be from God and maybe not.  He doesn't seem to be in a rush to discover the truthiness of it.  "If you instantly discount [the criticism]," Rob said, "you may miss the truth in it that you need to hear."

Sometimes you just have to leave some of these things up to God, he told us.  Which is why the Psalms are full of prayers where the pray-er is begging God to do awful things to his enemies.  Rob said that he was really angry with a guy once and while he was running he found himself sort of praying and wishing that God would let the guy fall off a cliff.

Jurgen Moltman wrote that these "prayers of violence" are cathartic.

Rob said that we need to get behind the fear that comes from criticism--the fear that causes you self-doubt.  "Maybe you hit first and didn't know it," he said.  Maybe, "your action was an implicit commentary on the way things have always been done."

This is why, he advised that "before you preach something new, sit with it for a while."  Before you launch off into a new direction, be patient.  You never know what is new and novel to you might be threatening and dangerous to others---perhaps even to the people in your congregation.

His advice continued.  Rob told us that it's "best to avoid talking about what is new and novel until it's second nature."  The temptation when you encounter new ideas, novel concepts, new approaches to ministry, theology, Biblical interpretation is to rush headlong into them and take your congregation with you.


"Don't work out your issues on the stage," he warned, "it's not helpful."


But it's wiser to let these things steep, and become such a part of who you are that they are second nature to you.  Then you will act and speak "as one with authority."

He put it another way... The "words" need to become "flesh."  It's like saying the words "Do not kill" as opposed to becoming the kind of person who willingly and gladly gives their life for another.

Rob shared with us a wonderful quote from Teddy Roosevelt that I will share in closing:

"It is not the critic who counts: not the man who points out how the strong man stumbles or where the doer of deeds could have done better. The credit belongs to the man who is actually in the arena, whose face is marred by dust and sweat and blood, who strives valiantly, who errs and comes up short again and again, because there is no effort without error or shortcoming, but who knows the great enthusiasms, the great devotions, who spends himself for a worthy cause; who, at the best, knows, in the end, the triumph of high achievement, and who, at the worst, if he fails, at least he fails while daring greatly, so that his place shall never be with those cold and timid souls who knew neither victory nor defeat."
2Days With Rob Bell church leaders Church leadership Criticism Critics pastoral leadership Pastoral Resources Rob Bell