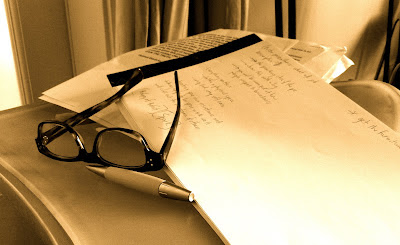 The first day of the inaugural  2Days With Rob Bell event has come to a close.

Fried though my brain might be, I feel as though I need to write down some thoughts for those who might be curious about what we've been doing.

To begin, there are 50 participants---mostly pastors, but also some lawyers, entrepreneurs, at least one doctor, some non-profiteers, youth pastors and church workers, to name a few.  Roughly 1/3 of the participants are women.   We are from all over the United States and Canada.

The event is taking place in an intimate setting overlooking the ocean, and there's not really a bad seat.  Rob sat in front with a couple of flip charts and a stack of notes.  He is tanned, and wearing flip flops.  0 to Californian in 5 months.

Of course, he began by asking us to open our Bibles and turn to Matthew 3, and he read the story of Jesus baptism.  I say "of course" because Rob is still a pastor.  Only now he's a pastor to other pastors.

His focus on Matthew 3 was on the phrase, "This is my beloved Son in whom I am well pleased."  Rob pointed out that at this point Jesus hadn't done anything.  His ministry hadn't started.  There had been no sermons, no miracles, no signs and wonders.

And God was pleased with him.   Rob wondered how many of us really need to hear that "primal blessing of the Divine."

Rob told us pastor-types that this is where it gets sticky for us.  "A paycheck really mucks this up," he said.  "You are paid to announce to people that they are loved just as they are."  He went on to tell us that we are also evaluated on this, which seems to go against all that is holy.

Sometimes you find yourself tied up in an institution or a denomination that has it's own goals.

We have to always remember, he said, that Jesus ministry begins with an announcement that the people who don't have it all together are blessed.


Rob then led us into a discussion about our identity in Christ.  While it was clear that Rob intended this discussion to have a wider appeal, he couldn't help direct it toward the majority of pastors in the room.

This inner wisdom gives us a real sense of what it looks like to be truly human.  "When you are more attune with your true humanity," Rob asserted, "you won't apologize for what you are and what you aren't."

Then Rob began riffing on leadership and pastoral identity in the midst of systems that are aligned against innovation, change and forward momentum. I'll just throw some of these quotes out there:

"Being a pioneer is lonely."
[this sort of speaks for itself]

"You cannot take people where they don't want to go."
[This was part of a discussion on how to get "stuck" churches to move]

"You learn all of the rules [of the system, institution, denomination] so you can break them."
[this was part of a larger discussion on how do you know how quickly you can make changes.  Rob said that some churches or institutions could not handle rapid change.]


"Go where the life is."
[this was part of a discussion on how to determine the sort of ministry you might be called to]


"What you aren't isn't interesting."
[Rob was encouraging us to stop focusing on what we were not able to do]


"You're sins aren't interesting and telling people how much of a sinner you are on your blog isn't interesting."
[here he was talking about how people often play up their "sinfulness" as some sort of badge of honor or as a way to gain readership]


Then Rob went on a riff about sin---quoting Calvin seminary professor Cornelius Plantinga he described sin as "culpable disturbance of shalom."  He noted that when you use this ancient Hebrew understanding of sin, you place it into a larger good thing, which is shalom.

"The Bible begins in chapter 1, not chapter 3." Rob said.

This is in keeping with Rob's thoughts on the doctrine of Original Sin, which he has asserted both in sermons and in his book Love Wins.

I know what you are thinking.  This feels like a disjointed sort of thing.  It was, but it also wasn't.  Somehow being there in the middle of all of these conversations---it all came together.

At this point Rob moved in a different direction in response to some comments that people made about pastoral identity in the midst of criticism and persecution.

He wondered aloud what was wrong with a Christian community that was full of such angry and fearful people.  "In the blogosphere," he said, "there are snipers on every roof."  Then he asked, "Do they wake up in the morning and just decide to crush some other Christian who is just trying to make the world a better place?"

Rob then began to talk about the way so many "movements" within Christian culture are all about tearing down what is "old," rather than building something new.

"What you win people with is what you you become known for," he told us.

Rob talked a bit about the Emerging Church movement at this point, remarking on how they seemed to be a collection of "angry former Baptists," who seemed more interested in destroying the institutional church, rather than creating something different.

[This resonated with me.  I once identified with the Emergent Church, but grew weary of how strident and divisive it's leaders became.  They didn't used to be that way, though]

Which naturally led us into a conversation about church growth, change and mega churches.

On change and the pain that it causes:
"You either have the one big moment of pain, or you have a slow trickle for a very long time."

On mega churches:
"Do you know that people talk about in staff meetings at mega churches?  They talk about how to connect people in smaller settings."
"There is not some giant divine value on whether a church is big or not."
"When you get bigger, you just get more problems."

On growth [the healthy kind]:
"You are either growing or you're dying."

Up Next:  Rob did some teaching on Calling, Preaching & Spiral Dynamics