How To Know The Pastor Is Getting Fired: A Primer 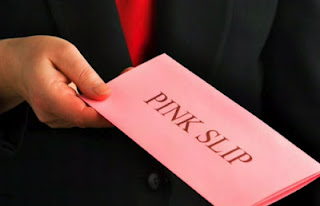 Thom S. Rainer, the CEO of Lifeway Christian Resources recently posted an article about the "Eight Warning Signs For Forced Terminations of Pastors."  His list is compiled through the combined research of the National Congregations Study and the Review of Religious Research.

Rainer states, "...this research does not tell the why of terminations; rather it deals with certain categories where pastors are more likely to lose their jobs."

So let's get to it, and see what you think.  Here are the indicators that will let you know that the Pastor is going to "get sacked," as our friends in the British Isles would so eloquently put it:

1. If the church had a recent church fight.
(I guess if you show up as a new pastor and there's a boxing ring in the
Fellowship Hall, you know you'll be leaving sooner rather than later)

2. If the church is declining in attendance.
(I get this, church members tend to blame pastors---even if it's not completely
their fault---for declining attendance, which is a scary sign that things are
bad)


3. If the pastor's sermon lasts between 11 and 20 minutes.
(I remember being TAUGHT in seminary that the sermon should be no longer
than 20 minutes.  My sermons tend to be 26-28 min on average, so my people
are getting their money's worth! But then again, I'm half a Baptist.)


4. If your church has almost no men.
(I have actually read this before.  However, I know that some church leaders
have taken this statistic to the extreme and have swung into a severe form of
male chauvinism and machismo evangelism.  I won't mention any names.)

5. If the pastor is a woman.
(I wish this weren't true for the sake of my sisters in ministry, but I am afraid
that it might be.)

7. If the congregation is old.
(I know that this might lend itself to some "Duh!" comments, but I think what
this is referring to is a congregation that either is not at all intergenerational
or perhaps not enough to make a difference)


8. If a slight majority of the congregation is poor.
(This was a head scratcher for me... I am not sure what to do with it)


You can read the whole article HERE.

How does this study strike you?  What bothers you about it?  Do you think it's true?