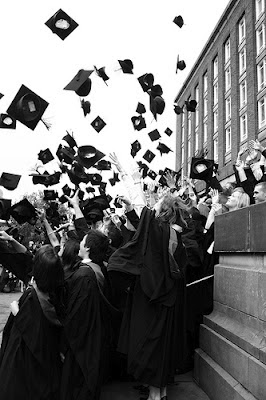 Tonight I am attending the high school graduation ceremony of a friend's daughter. It's being held in a gymnasium that smells faintly of sweat and something else. It's not an unpleasant smell. It reminds me of things that are worth remembering.

On the night of my graduation from high school, I remember telling someone--I can't recall who now--"This is surreal."

Most things that are life-changing tend to be.

This is what was surreal about that particular life-changing moment:

I had waited for years to experience it, and realized in the midst of it that it wasn't the end of something, it was the beginning.

And I felt tired for just a second.

But it did make me tired, and in that split second I got a glimpse of what much of life is like: periods of great effort, followed by great triumph or tragedy and then you have to start all over again, and sometimes from the bottom.

I remember feeling foolish in my cap and gown. I felt like I was in clown costume and being paraded before a leering bunch of rubes in some small town circus, who had gathered for a show.

And then the moment passed.

I stood in front of my parents, whose eyes were filled with tears as they remembered how I looked in my miniature cap and gown when I graduated from Kindergarten. I stood next to people who I had laughed with and learned with for literally years of my life.

And the moment ceased to be surreal...

It was fine and good.

I was one of those two.

And little did I know in that good and fine moment that I was standing on the stage in my cap and gown with the girl I would one day marry, the woman who would give birth to our three boys.

The woman who sits with me in this gymnasium that smells like the past.

And I realize this is one of those surreal moments that makes me realize that most of life is about endings and beginnings--triumph and tragedy--moments on the mountain and moments in the lowest part of the valley.

But this time I don't feel tired.