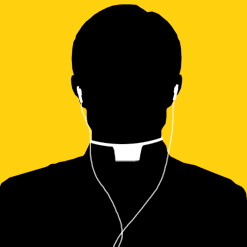 So today I decided to wear my new clerical collar with my cool black clergy shirt while I am journeying to California. I wanted to see what it felt like to actually wear "priestly" garb.

My Catholic and Episcopal colleagues are probably laughing at me at this point. "Tourist!" they are thinking, "try wearing this all the time."

I hear you.  Presbys have gotten a little casual.

The other reason I wanted to wear my clergy collar was to see how people treated me throughout a very public, very long trip across the country. I knew I would be in airports, shuttles, airplanes and cabs all day today. Having never donned the symbols of "ordination" beyond the context of a worship service (I wear a robe and stole during traditional worship services), I was very curious to see how I would be perceived.

My first up close encounter was with a trio of college kids who piled in to the elevator with me at the Orlando airport. They stared at me, looked away and then proceeded to ignore me as they carried on a conversation about a mutual friend. As we were going up the escalator, one of them turned to me. "Are you a pastor?" she asked.  I told her that I was. "I thought so." she said. The sarcastic goober in me wanted to say, "What was your first clue?" but there was something in the way she said it, that caught me off guard.

What was in her voice was a kind of sweet childlike recognition.

Obviously, I have no idea what her story is...what her knowledge of pastors might be. At that moment, though, she saw me and she knew I was a pastor---and this was something she felt compelled to tell me.

Can I tell you how much people stare at you when you are dressed in clergy clothing? I saw people actually let their gaze linger for a moment on the way I was dressed, rather than the usual cursory glance that they might have given if I'd been in "civilian" dress. I imagined all of their notions about pastors and priests running through their minds.  Were they good notions?  Or something else?

At Starbucks there were two charming Latina women working---one took my order, and as she handed me my receipt she said, "Thank you, Father, God bless you."  I have to admit.  It felt kind of good to be called "father" and to be blessed after swiping my Starbucks gift card.

The young woman who made my Grande Skinny Cinnamon Dulce Latte handed it to me and she, too, shyly told me "God bless you."  I said, "Thank you," and then quickly added, "and God bless you, too."

By the time I got on the plane, the collar was itching the heck out of me.  I would realize later that there is an uncomfortable way and a not-uncomfortable way to wear a clergy collar.  I had chosen the former.

As I walked on the plane, a man in first class holding a drink looked at me and exclaimed, "Well, now we're safe!"  As if the fact that a pastor wearing a clergy collar on the plane somehow netted us all a pass if it came down to a disaster.  I laughed nervously, and said "Yes, we're good." as if I actually believed that I had netted the aforementioned pass.

At some point in my journey---in the Dallas/Fort Worth airport, to be precise---I fixed the discomfort in my collar, which had started to dig a sore spot into my neck.  I had begun to wonder if the clergy collar was the 21st century equivalent of the Medieval "hair shirt" that priests and monks used to wear under their clothes.

[A word of explanation:  The hair shirt was a vest made of tough horse hair that would rub your skin raw.  These Medieval guys would wear hair shirts to remind themselves of their vows of piety, or to atone for looking at a woman's ankle.]

I noticed some other things, too.  People were nicer to me.  When I went to an information counter, the woman behind it was staring at her phone and not really paying attention.  When I went up to the counter and said, "Excuse me." she mumbled something and managed to tear her eyes away from her phone with a sour expression.  As soon as she saw me, she stiffened and smiled a nervous smile.  "How may I help you?!!?" she nearly shouted.

I did have kind of a bad moment, though.  This is going to sound a bit crazy, but bear with me...

At some point I had this uncontrollable urge to change clothes and take off my clergy wear.  It was like a moment of panic that came over me all of a sudden.  I actually was thinking, "I don't want to do this anymore..."  I wanted to wear my own clothes and just blend in to the crowd.

But I didn't.  I kept the clergy wear on, and the desire to shed it faded a bit.

Because what I am is a pastor whether I am standing in the pulpit at my church, or the hospital bed of a dying church member----or in the airport waiting for my flight.  I don't need clergy wear to affirm my sense of call.