The Sword of the Lord: Book Review 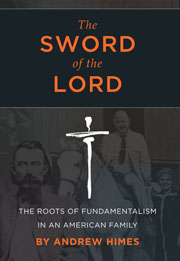 Some months ago I purchased The Sword of the Lord:  The Roots of Fundamentalism in an American Family by Andrew Himes.  It was one of those impulse Kindle purchases that I made because of some recommendation or another  of the book that I read in a magazine.

Then I promptly put it on the virtual shelf in my iPad.  I had other books to read at the time, and wasn't sure when I would get around to it.

To my surprise when I picked up The Sword of the Lord recently, I couldn't put it down.  It was an amazing read about an amazing family---perhaps the "first" family of Christian fundamentalists in America:  The Rice's.

Full disclosure:  I was born and raised a fundamentalist Baptist.  My dad graduated from Bob Jones University, and I only attended fundamentalist Baptist churches, and went to fundamentalist Baptist schools.  I have baggage.  In fact, I have only recently begun to deal with my baggage in a productive way.  For years, I spent a great deal of energy doing whatever I could to discredit those who still adhered to the faith of my youth, and to distance myself from it in the doing.

And I lost something along the way.

Himes traces the rise (and fall) of Christian fundamentalism in America in an engaging, forthright and even handed way.  This is not just a history of a movement, it is the history of his family, and a chronicle of his own journey both within and without the fundamentalist camp.

This movement, which Himes calls "A unique American expression of evangelical Christianity," had it's roots in 17th century Scotland & Ireland and throughout it's colorful and questionable history remained, "profoundly democratic...anti-clerical, militant and missional, convinced that God was naturally on the side of Americans."

The characters in Himes history are familiar ones: Billy Sunday, Bob Jones, Sr., Billy Graham, Jerry Falwell... And Himes weaves them into the story in such a way that the reader understands more clearly what they believed and why they believed it.  Regardless of where you might be on the theological divide, you find yourself (gasp) even empathizing with them.

Himes also expertly defines Fundamentalism and helps the reader understand why it just seemed to work for those who adhered to it.  He writes,


"Fundamentalism was a rational and emotional response to a dangerous world where you needed to know who was a sheep and who was a goat, who was for you and who was against you, who might slip a blad between you ribs and who would love you back."

Himes also moves fundamentalism forward, reconciling himself with his past. He  re-imagines a Christian fundamentalism that borrows what is pure from it's former embodiment and melds it with Jesus' own grace-filled teachings.


"A fundamentalist Christianity worthy of the name will be a fundamentalism that pours out the love of God for all humanity, without judging or despising or holding back in the slightest."