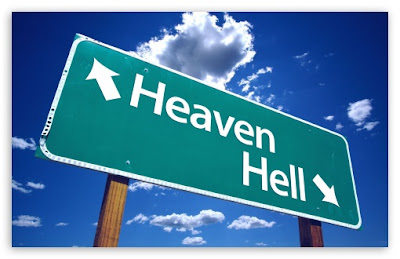 So this week I am preaching on hell.

Or decent and in order.

But I've heard my fair share of sermons on hell because I grew up in fundamentalist Baptist churches where it seemed to creep into most of them.

Hell, as it was described to me was a place of eternal torment.  There was fire in hell as well as brimstone, agony, anguish, eternal regret and the Devil and his minions, who added to the horror by dreaming up even worse ways of torturing lost souls.

And as if that wasn't bad enough---after spending years in hell, lost souls had the Lake of Fire to look forward to after Jesus' Second Coming.  There they would do laps in a burning "lake" for all eternity alongside the eternally doomed Lucifer and his band of fallen angels.

I was a rather frightened child.

In fact, at a "Watch Night" service for New Year's Eve I watched a movie that scared me so badly I slept with a nightlight for two years afterward.

"Watch Night" services---for the blissfully unaware---are late night services that we used to hold at the fundamentalist churches I attended.  They happened on New Year's Eve.  Instead of partying, dancing and downing champagne to ring in the New Year, we were singing hymns listening to sermons and spending an hour or more on our knees praying that Jesus would come back soon---hopefully that night, since we were all in church.

At one of these fun-fests someone showed a "Christploitation" film entitled The Grim Reaper.  The idea was to invite "unsaved" people who were going to hell in a handbasket to church that night so they would avoid the damnation of a New Year's Eve party and watch a movie that was designed to share the Plan of Salvation with them.

The Grim Reaper was that film.  It was made in 1976 by Tom Ormond, who, before becoming a fundamentalist Christian, made his living making low budget horror movies.  It also had appearances by Jerry Falwell and evangelist Jack Van Impe playing themselves.

They make it look difficult.

In the movie a young man who is a race car driver dies in a horrible accident.  As he is dying, his brother and father stand near him.  His brother, who is a Baptist preacher, tries to get him to pray a sinner's prayer, but the young man refuses to do it unless his dad does.  The father refuses, and the young man dies.  After trying to contact the spirit of his son in a seance, the father returns home where the ghost of his son appears to his wife in a vision.  He is burning in hell, and tells his mother, "Hell is so hot, Mama!" A demon comes to drag him back.  The father later has visions of his son burning hin hell, and accusing him of putting him there.

So it was a family film.

Here's a segment from the movie that I found online.  Watch it if you dare.


You're probably wondering what frightened me so badly.

It was the clothes.  Those leisure suits and big old fat ties scared me to death.

It was actually the poorly done special effects of the young man drifting through his mother's bedroom that did it for me. I was a sheltered young fellow, so sue me.

These were the images of hell that I carried with me.  It was a "Turn or Burn" theology.  Unless you accepted Jesus Christ as your personal Savior, I was told, you would spend eternity burning in hell.

These are the same images of hell, and the same sort of theology that still dominates much of evangelical Christian culture.

I completely understand why mainline, mainstream Christian-type people tend to downplay hell in their theology... or ignore it altogether.


If your reason for wanting to follow Jesus is based solely on a desire to escape hell, you're ignoring what God is really up to in the world:  writing a Big Story of Salvation and Redemption for all of Creation.

There's no escaping the fact that Bible talks about hell on more than one occasion.

And if you are a Christian you can't just blithely say, "God is a loving God, who loves everyone, and just oozes love, and such a loving God wouldn't dare do anything that isn't loving."  Although plenty of Christians do just that.

God is love.  And love is just.

Which is why I believe in hell.  But just as I believe the kingdom of God is breaking through all around us----I also believe that hell exists on this earth, in this time as much as it does in eternity.

And I don't believe it's a fiery pit... or a lake of fire... or a really cold place that is so cold that it feels like you're on fire...  The poet Dante, who gave us The Inferno, had an active imagination, and I bet he didn't sleep well either.  Centuries after he wrote his epic poem that toured the reader through the many horrible levels of hell, Dante's poem still informs what many people still believe about the place.

Here's the thing, I don't believe it's a place at all.  Okay.  Maybe it is, but it's definitely some other place that is beyond our understanding and imagination in this place.


And it is with this that we begin our journey into hell and back for the week...

Next:  What the Bible has to say about hell, and what we do with all of it.