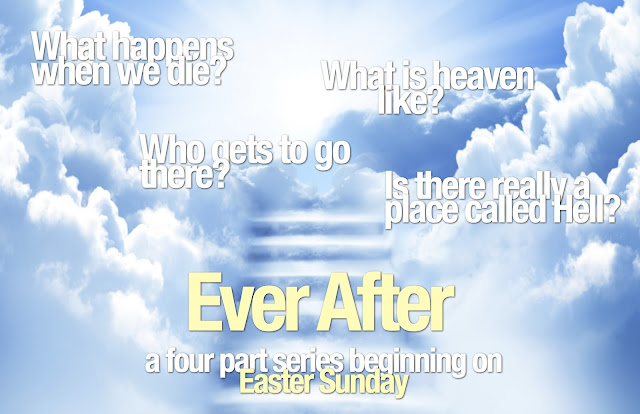 Is it where God lives?  A city of gold with pearly gates?  Is it full of angels with wings, strumming harps?

Or is it just a state of being in perfect peace---one with the universe, some might say.

Is it where "good" people go to spend eternity after they die?

Does anyone really know?

Well, some people actually claim that they do.  According to a Gallup pole at least 8 million people in America alone have had near-death experiences, nearly all of whom emerged from them with an unshakable belief in the afterlife.

Once when I was visiting an elderly lady at her home she leaned over and in a conspiratorial whisper she told me, "I have seen Heaven."  Of course I immediately asked her "What's it like?"  She went on to describe an unbelievable journey from a bed in a hospital room through the air and to a beautiful garden filled with light.  I can still see her face as she described it.

Even the most skeptical people have a hard time explaining away these kinds of experiences.

What I have come to see through the research that I have been doing for this week's sermon on Heaven is that in a country full of skeptics, Heaven is making a much needed comeback.

And in the midst of this atmosphere of anxiety, people turn to hope.  And stories of hope in the afterlife become more than just popular---they become cultural phenomena.

In 2010 a young Pastor named Todd Burpo published a book about his little son Colton's near-death experience in 2003.  The book, Heaven Is For Real became a New York Times bestseller.  Colton had an emergency appendectomy, and experienced Heaven while he was under sedation.  He described seeing his father and mother in the hospital as he floated above them, and then gave accounts of sitting on Jesus lap, seeing his sister (the Burpo's had a miscarriage before Colton was born), hearing angels sing and much more.

Colton also described meeting Todd's grandfather, and was privy to information about him that could only have come from revelation or an actual encounter.

Despite the mystery surrounding some of the experiences described by Colton, there are many people who are skeptical.  I have to admit that after I read the book, I was one of them.

Skepticism is natural.  This is mysterious stuff and it's hard to make the leap sometimes---even when you want to make it.

But there are more stories---eight million of them or more.

Don Piper's best selling book 90 Minutes In Heaven relates his near-death experience in 1989.  Piper wrote the book "in self defense" to finally answer the many questions that people have asked him about Heaven over the years.  Piper describes meeting friends and family members there and feeling unbelievable peace.  There was music, and light and although Piper never saw God he felt God all around him.

Mally Cox-Chapman author of The Case for Heaven: Messages of Hope From People Who Touched Eternity, had a near-death experience in the midst of a car crash.  As her car spun out of control, she heard a voice say, "Relax, it's not your time to die." She let go of the steering wheel and lapsed into a state of perfect peace.  She didn't have visions of Heaven, but her experience led her to begin interviewing those who have.

One of the things that almost every person who has a near-death experience describes is a sense of a greater purpose when they return.

This is important.  Because Spirit-filled visions of Heaven shouldn't make us long so much for it that we neglect what we are called to do and to be on earth.

I think that the Church needs to lift up visions of Heaven.  We have moved away from visions of Heaven that are grand, expansive, imaginative and thoughtful.  Instead we chase after our own desires, feelings and  fantasies.  We have embraced a vision of Heaven that is laced with the language of escape, and we have abandoned this life for a better one in the next.

A Spirit-filled vision of Heaven should give us hope for the future and a purpose for the present.

In Part 2----we'll take a look at Isaiah 2:2-4 along with passages from a few other prophets and mystics in the Bible who had what I believe are near-death experiences, and were granted glimpses of Heaven.

We'll also examine the work of Emily Williams Kelly, a scientist who has studied and interviewed hundreds of people who have had near-death experiences, and learn what she believes about whether they are true or not.