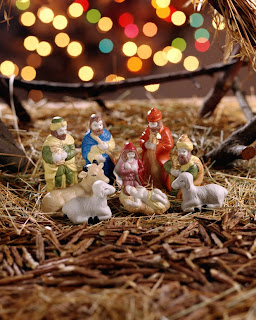 This night is full of mystery and... hope.

Forget what the scholars say about how Jesus was probably born in the summer.

That the stable was probably a cave.

That Mary could have been as young as thirteen.  And Joseph as old as fifty.

For centuries the faithful have gathered on this night to celebrate the birth of the Prince of Peace, the Savior who is Christ the Lord.

Some are drawn to gather for reasons entirely their own.

But drawn they are, because there is something about this night that cannot be denied--a sense of the magical, if I might border on heresy.

Some gather because they were driving by the open door of a church and a glimpse of the lights and the warmth inside compelled them to stop.

Some gather because their mom guilt-tripped them into gathering, and when they are sitting in the pew and smelling that church smell, and begin hearing the choir sing "Hark the Herald Angels Sing," they feel something stirring in their heart.

That last one was me when I was about 19 years old.

I think that one of the feelings that stirs within our hearts on this night is our sense of destiny.  After all, this night reminds us that because of the birth of the King of Kings the destiny of the world was changed forever.

And we also can't help but think of the destiny of the little baby lying in that manger.  Because there is a shadow that falls across that peaceful scene of a starry night, a stable and shepherds gathered in adoration---a cross shaped shadow.

The Gospel story reveals to us that the destiny of that little child was to suffer and to die.  If we think about it long enough, and let ourselves sink into the story for a moment, it is enough to break your heart.

It should break our hearts.

You see, the destiny of that little child changes our own destinies.

Because of that cross-shaped shadow, we know that we can live in hope instead of fear.

We can live in joyful freedom instead of guilt and shame.

We have the certainty of a destiny that is filled with promise and fulfillment.

Because of this night.

And the cross shaped shadow.