"Where There Is No Vision" 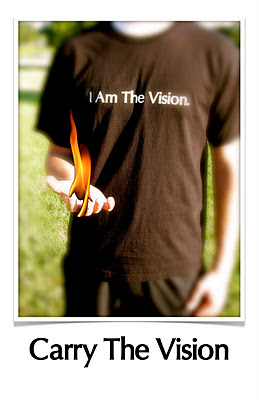 There is this vacant lot I drive by every day on my way to work that until just a couple of weeks ago had this partially constructed house on it.  Whenever I looked at it, I wondered what happened that it was never finished.

Here's a video on the site of the unfinished house and a short message to my congregation about the sermons I am preaching for the next two weeks:

Funny thing.  I shot that video before leaving on a trip to the Holy Land for two weeks.  While I was gone, whoever owns the property decided to tear down the house.

Whatever plans that someone had for that house a long time ago when they started building it are fairly irrelevant now.  The vision was lost and now even the reminder of lost vision is gone.

Maybe somebody with a better vision will come along and make something happen on that vacant lot.

Here's why a vision is necessary:  When you don't have one, or you lose the one you had, things start falling apart.  And sometimes things fall apart so badly that they cease to be.

Proverbs 29:18 puts it like this: "Where there is no revelation (vision) people cast off all restraint, but happy is the one who heed's wisdom."  In the old King James Version of the Bible it reads, "Where there is no vision, the people perish..."  It gives you the idea that without a vision, there's no direction.

Here's what I'd like everyone to take away with them on Sunday...

Proverbs 29:18 was a reminder of what happened to the Hebrew people at the foot of Mt. Sinai when the threw off restraint and began worshipping a golden calf.

At the end of the book of Exodus we see the Hebrew people losing their vision at the foot of Mt. Sinai.   It seems that Moses had been on top of the mountain talking to God for a solid month.  The people he was leading were sitting and waiting for him in the middle of the desert.  I've seen the kind of desert that they were stranded in, and it's barren.

So they get tired of waiting and they tell Moses brother Aaron to build them a golden calf to worship. Their intent was to build the calf, which was a pretty standard image of worship in Mesopotamian cultures at the time, and then follow it out of the desert and on to the Promised Land.  Initially, they claimed that they were still wanting to worship Yahweh... they just needed something to point to Him.  Moses was gone. The pillar of fire and cloud they had been following was gone.  So they needed a calf.

It didn't end well.  When Moses returned he found a full on sex party in swing.  He broke all ten of the Ten Commandments at once, and then ordered that the calf be ground up into powder, thrown into a stream and then drunk by everyone.  Oh, and a whole bunch of sexed-up Israelites were executed.

I Samuel 3:1 reads, "The boy Samuel ministered before the Lord under Eli.  In those days the word of the Lord was rare; there were not many visions."

In the days of Samuel's childhood, the Hebrew people had lost the vision they once had.  Things had gotten pretty bad in their worshipping life, too.  The religious leaders of the day were corrupt, and everything in "the church" was falling apart.

It was the custom of the priests to get a share of the sacrifices that people brought to the Tabernacle.  They would stick a three pronged into the meat of the sacrifice while it was being boiled in preparation.  Whatever meat peeled off on the fork was for the priests.  It was intended to be enough for them, but not too much.  In Samuel's childhood, the sons of the high priest, Eli, would force people to give them portions of raw meat to ensure they got more than their fair share.  They didn't see the offerings as God's, but their own.  The Bible says that they had "contempt" for the offering.  On top of that, they were having sex with the women who were supposed to be serving outside the Tabernacle.  Basically, they were treating them like the temple prostitutes who "worked" at the Canaanite temples around them.

I see this as a metaphor for a church without a vision.

Such a church is marked by a lack of trust in God.  Like the priests who wanted to ensure they didn't have to rely on a fork, churches without a vision tend to fret and worry that they won't have "enough."

Churches without vision also seem to value Control over Generosity.  They show a contempt for the offering, seeing it as beneficial only for the perpetuation of the church, and not for the glory of God.

I have some questions for my own church.

Will people say, "They had good programs" or "They helped to transform lives?"

Will people say, "They had nice buildings" or "They showed Jesus to the world?"

You see, it's not enough to have a vision... you have to actually pursue it, or you might lose sight of it.


Several years ago, I heard the story of two guys in Madison, Florida who had a church.  Yup. Two guys.  They were the last two guys in the church.  Everyone else had left.  These two guys would pool their money and hire a preacher to come preach in the church once a month.  They kept the lights on, and did all of the maintenance work themselves.  No one else ever attended their church.  Because there were just two guys in it.

I often wondered what their neighbors thought.  I am sure they all had a good laugh at the two guys and their church.  Either that or they felt sorry for them.  Both responses are pretty awful, if you think about it.

At some point the Church of Two Guys lost it's vision.  The two guys refused to admit that it had all fallen apart.  But everyone else knew it had.

Which brings me back to the vacant lot.

Isaiah 5:8-13 gives us a glimpse of what it's like when things fall apart due to lack of vision.  If you click and read the reference, you'll see just how awful it is.

As long as that abandoned, almost-done house was still standing on that lot, everyone who passed by would see it as a sign and symbol of a loss of vision.

Only after tearing it down and starting over will the constant reminder be robbed of it's power.

And what is our vision?  What will we lift up to both ourselves and to the world as the banner that we follow?

That's all the vision that we need.

If you need something more...

When you know Jesus, you want to show Jesus.

This is our vision, our purpose, and our direction.  We must desire to know Jesus intimately.  And when we know Jesus---really know Jesus---we will want to show Jesus to the world.

And the world needs to see that...