The Church & The Gates of Hell 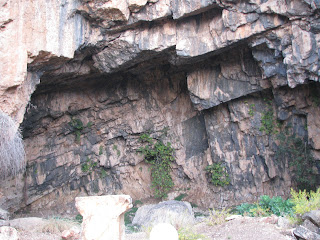 The photo to the right was taken at the Gates of Hell.

This was the ancient name of this massive cave at Caesarea Philippi where the Banias River began as a spring, flowing from its mouth.

3,000 years ago the ancient Canaanites believed this site to be mystical - a doorway into the afterlife.  They worshipped the god Baal here, particularly for fertility rites.  Their worship included depraved, sexual immorality, temple prostitution and child sacrifice.  Babies were laid upon the super-heated outstretched arms of the bronze statues of Baal where they were literally roasted alive.  And all of this was done to ensure a good harvest--the safety and security of the people.

In the time of the ancient Greeks this same spot was considered holy and mystical and also a place where fertility was honored and prayed for fervently.  It was also a place that was believed to be the gateway to Hades.  Adherents engaged in sexual depravity, temple prostitution and child sacrifice.  Babies were thrown into the cave, where the spring flowed to be drowned.  If adherents saw blood in the water, it was a failed sacrifice and had to be repeated.

In the time of the ancient Romans, when Jesus visited Caesarea Philippi, the temple was refashioned in Roman splendor in honor of the god Pan, Roman god of fertility.  There were other shrines and grottos at the site, but Pan was worshipped fervently... by depraved sexual immorality, temple prostitution and child sacrifice.

These were known as the Gates of Hell.

This is where Jesus brought his disciples before he journeyed to Jerusalem and to his death.  He told them here that it was upon "this rock" that he would build his church and that the "Gates of Hell" would not prevail against it.

Think about this...  Jesus establishes the church AND proclaims that it will withstand the evil that is present at the Gates of Hell---an evil that had been prevailing for a very long time.

Jesus would have known this passage from 2 Kings:

They threw out everything God, their God, had told them, and replaced him with two statue-gods shaped like bull-calves and then a phallic pole for the whore goddess Asherah. They worshiped cosmic forces—sky gods and goddesses—and frequented the sex-and-religion shrines of Baal. They even sank so low as to offer their own sons and daughters as sacrificial burnt offerings! They indulged in all the black arts of magic and sorcery. In short, they prostituted themselves to every kind of evil available to them. And God had had enough.


Jesus would have known this passage from 2 Kings.  I am sure as he and the disciples stood there at that evil, pagan site they would have felt the weight of God's words to their ancestors.

"And God had had enough."

It's not a stretch to see the connections between those pagan cultures of the ancient world and our own.

It also seems pretty clear based on where Jesus was when he taught his disciples that he had some clear ideas about what the Church should be.  The Church was established to stand in sharp contrast to what was happening at the Gates of Hell---to be a community that would not give in to the prevailing depravity of the culture, to be a community of grace and peace... and redemption.

Which is why it seems odd that some Christians claim that sexual immorality is best left in the bedroom when we discuss the values of the Church and the Believers within it...

Or why some Christians believe that it's perfectly fine for someone to end their pregnancy by aborting their baby and that the Church should stay out of matters of "choice."

Or why some Christians bow like the ancients to worship Safety and Security no matter what it costs and believe the Church should do the same.  Even if it means abandoning the poor, the lost, the needy and those who need the Gospel.

So if Jesus claimed that the Church---the true Church--would not be prevailed upon by the Gates of Hell, then what must be said of a "church" that turns a blind eye to those very Gates as they are represented today?  Or worse yet---perpetuates  the culture of the Gates by very nearly blessing them.

"And God had had enough..."  Those words land upon this form of a "church" as they landed upon the children of Israel in 2 Kings.

I think there is a reason why so many denominations are hemorrhaging members, why so many churches are dying or dead, why so many Christians look, sound and act just like the culture around them.

Perhaps God has finally had enough with that form of a "church."

The congregations that I see that are thriving, growing and attracting people to the Gospel are the ones who get what Jesus said at Caesarea Philippi.  They get that the Church really is a new community and not one that tries to water down the Gospel to the point that it loses it's scandalous nature, and is absolutely unoffensive to the culture.

These are churches who transcend the "conservative" and "liberal" divide and simply act like the Church that Jesus established... one that withstands the immorality and decadence of the Gates of Hell---wherever they happen to be in our own culture.