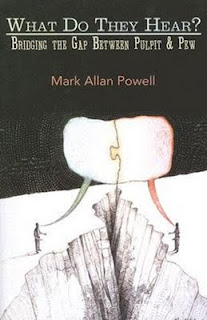 What Do They Hear? Bridging the Gap Between Pulpit & Pew by Mark Allan Powell (Abingdon, 2007)


I read books about preaching and pastoring all the time.  I should.  I'm a preacher and a pastor, and I want to get better at being both.  Every so often, I stumble upon a book that just makes sense, and speaks right into the heart of where I happen to be living at the moment.  What Do They Hear? is one such book.

Mark Allan Powell is a Literary Critic, who also happens to be a pastor and a preacher.  In What Do They Hear? he utilizes the tools that a literary critic would use when evaluating a text to address the differences between what clergy and laity experience when they read Scripture.  He does this for the purpose of educating clergy on ways that they might transform their preaching and more fully engage and inspire their hearers.

Powell engaged in experiments where he had 50 clergy and 50 lay people read the same passage of Scripture, and then asked them what they thought it meant--first to them personally, and then in general.  What he discovered was fairly remarkable.  Clergy tended to focus on the original meaning of the passages and then moved toward application of that original intent.  Lay people tended to focus on the application of the passages as they related to them where they were.

In other words, clergy seem to focus on the meaning of Biblical text, and lay people seem to focus on the way it makes them feel.  Lay people seem to want to be moved by Scripture.  They want it to act on their lives---sometimes in dramatic ways.  When this divide between the way that clergy and lay people read Scripture is ignored, then the power of the sermon is diminished and the ability of clergy to effectively convey the Gospel is diminished as well.

Powell indicates that in literary criticism there exists an understanding that the reader of a text does not come to the text empty handed.  The reader's point of view, emotional baggage, context, etc., are all part of the way that the reader extrapolates meaning from the text.  This leads to polyvalence, the concept of readers creating multiple meanings out of a single text that may or may not be congruent with the intent of the author.  Powell asserts that most of the time readers are completely unaware of their role in the process, which creates problems for preachers who ignore the reality of polyvalence when they preach. He writes:


People who hear our sermons do the same thing--they sort the auditory data, prioritizing, organizing, remembering, forgetting: they create a meaning that seems appropriate to them with little awareness of the extent to which their social location has influenced the process.

Powell exhorts preachers to take into consideration the role of the hearer when they preach, and to be fully aware of the ways in which lay persons both read and hear Scripture.  He also exhorts preachers to be adequately prepared to present the text in engaging and intentional ways--keeping all of the aforementioned in mind.  He re-defines preaching as "the performance of scripture"--an event within which the story of the Scripture is allowed to speak and be shared in community.

I highly recommend What Do They Hear? to any pastor or preacher who is seeking to improve his/her communication skills.  For that matter, it could be used as a reminder for any communicator--clergy or laity--that the role of the hearer must be considered prior to the act of communication.  The only issue that I have with What Do They Hear? is that it stops short when it comes to the practicality of preaching preparation.  I realize that this was not exactly the scope of the book, but Powell does broach the subject, only to leave it sort of undone.  I am a huge proponent of preaching without a manuscript, which I believe is in keeping with his concept of the sermon as an event.

Manuscript preaching is losing it's relevancy in a post-Christendom, visually driven, interactive culture.  True to his mainline Protestant roots, Powell sort of lamely posits that practice and preparation are required to effectively present the sermon, but clearly falls on the side of the Reading Preacher model.  This is unfortunate.  If mainline Protestant churches are going to survive in the 21st century, we need to start teaching seminarians to preach more effectively and stop hiding behind the pulpit and a few pieces of paper.   If we don't, we'll continue to see the same sort of exodus from our dying denominations that we've been experiencing for years.

But that's just my own personal opinion...