Why I am Glad Lebron LOST 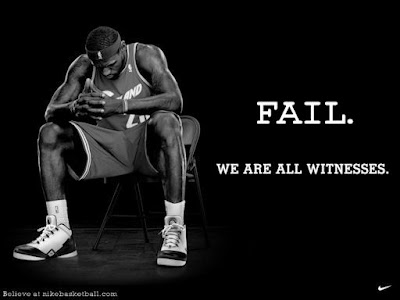 I know that as a pastor I shouldn't revel in the failure of another.  I know this, and yet in the case of Lebron James, I feel I should get some special dispensation.

For those of you who have no idea who Lebron James is, let me give you a primer.  James was a basketball phenom who entered the NBA Draft right out of high school.  As a 19 year-old, he was one of the highest paid, lavishly lauded, most watched basketball players in the world.  Lots of players over the years have been given the monicker of "the next Michael Jordan," but in James' case it actually looked like it might be true.  He was drafted by the Cleveland Cavaliers and returned to his home state to lift the under-performing Cavaliers and the entire city of Cleveland on to his shoulders and forward into history.

Only it didn't work out like that... exactly.  Lebron spent seven grueling seasons in Cleveland making the playoffs, the NBA finals (the Cav's lost to the Heat, ironically) and generally having more success than almost every other team in the league.  But that wasn't enough for Lebron.  It wasn't happening quick enough.  Think about this...Michael Jordan had to wait for 7 whole years before he won his first championship, but Lebron couldn't very well be the next Jordan if he had to wait too much longer..

Throughout this time period, James showed his butt, acted like a poor sport, a spoiled brat, you name it.  All the while making millions and playing a game for a living.

So when James became a free agent last season there was great speculation as to what he would do.  Would he move to another team?  Would he stay in Cleveland?  In the end, James orchestrated an hour long ESPN special where he announced in the end that he had decided to take his talents "to South Beach" to play for the Miami Heat and be with his friend, superstar Dwayne Wade.  The team also added highly sought free agent Chris Bosh.  The Trio as they became known then held a rock concert coming out party in Miami where they were raised through a lift on the stage through smoke, lights and pumping rap music.

They bragged about how they were going to win more than 6 championships---which is how many Michael Jordan won during his long career... with the same team, the Chicago Bulls.

The reaction over James' departure from Cleveland was vitriolic.  Fans burned James Cavalier jersey, unleashed online tirades and a whole lot more.  Everyone expected that.  Lots of fans have experienced the departure of a sports star to another city (Babe Ruth from the Red Sox to the Yankees was probably the first major trade of this nature), and have hated on that star, and the city afterward.  What was unexpected, however, was the way in which James garnered universal hatred.

The logo to the right was created by anti-Miami Heat fans when the Miami Heat made it into the NBA Finals this year.  They weren't Cleveland fans.  They just wanted James to fail.

I had a twitter conversation with a guy who was decrying the hatred that was being leveled at Lebron and the Heat.  Finally, I ended our conversation by saying, "Every story needs a villain, and Lebron is the villain for this story."
It was more than that, though.  I knew it and I think he knew it.

The reason why so many people wanted Lebron to fail had less to do with his villainy, which was fairly great, and more to do with a need to prove what they'd been taught about sports when they were kids was really true.

Lebron James has been blessed with unbelievable abilities.  He also has acted like an unbelievable idiot.  He was virtually scoreless in the 4th quarter of each of the Finals games.  He gave up when his team needed him, just like he's done for years.  Only this time, he can't blame it on his supporting cast, on the owners who didn't give him a good team to play for...

He can only blame himself.  Which he did... sort of.  And then he decided to keep talking, which was a mistake.  After the Heat lost in the NBA finals to the Dallas Mavericks Lebron offered this critique of those who had rooted against him:

Awesome.  In other words, I'm going to be rich and drive off in my Bentley and you'll still be flipping burgers, suckah. Classy.  Very Jordanesque.

For the sake of my kids, who I want to teach that sometimes poor sports don't get to win...

For the sake of the city of Cleveland, who had their hearts ripped out...

For the sake of the NBA, who redeemed a tarnished image when the Dallas Mavericks---a real team of misfits, old guys and real basketball players--won their first ever championship...

For all these reasons and more I am glad that Lebron lost.

One day he may develop some humility discover what it means to be a teammate, honor the game that has given him so much and find his way to the championship stage.  If he does, I might be glad for him.