There's An App For That - Week 9 "Self Control" 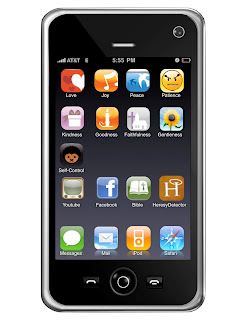 For the past 9 weeks I have been preaching a sermon series on the Fruit of the Spirit.  Notice I wrote fruit, not fruits.  There are no fruits of the spirit... just fruit.  The Bible does indicate that you will know people by the "fruits" of their life, but those kinds of fruit have nothing to do with the sort of fruit that Paul is describing in Galatians 5:22-26.

This week I am preaching on "Self Control," the last of the 9 aspects.  It's also the one that fits most ably within the theme of the sermon series, "There's an App for That."

I discovered a new app for my computer.  It's called (drum roll please) "Self Control."  When you download and install it, you can set it up so that your computer will not allow you to receive tweets, email, or any other communication.  This would probably be a good thing for me because in the past few seconds that I've been writing this blog entry, I've answered three tweets.

Funny.  It used to be the guy from three cubicles down was your biggest distraction when he would drop by every so often to shoot the breeze.  Now it's people half a world away wanting to "chat" while you're hard at work. Image via Wikipedia
At any rate, I haven't launched it yet.  I guess I don't have enough... yes, you guessed it: "Self Control."

Here's a deep, philosophical question for you:  Can you actually eat just one Lay's Potato Chip?  Look at them.  You want every chip on that screenshot, don't you? Remember that marketing campaign?  Brilliant.  "No one can eat just one."  I've tried.  It's difficult.  They're so thin and bad for you. They taste like sinning, and you know how much we all like to sin.

I love this "Theology of the Lays Potato Chip" because it taps into some of the deepest struggles that we all have to keep ourselves in check.  The Lay's Potato Chip is an assault on my senses.  As soon as I eat one, I want another, and another.  I begin to imagine what it would be like to sit down in front of the TV with a tasty beverage and lay waste to the whole bag before wiping my grease soaked hands off on my pants.  A few years ago, Pringles ran a hate ad showing a slovenly fellow eating Lay's and wiping greasy hands on his pants.  The nice looking young lady eating Pringles, however was completely grease free.  Yeah? So what!  I love that the Lay's Potato Chip is greasy, it reminds me I'm eating fried potatoes drenched in salt.

Sorry about that.  Do you notice, though, that our definition of "self control" typically centers on deprivation?  If I limit myself to one Lay's Potato Chip, then I am a good person.  If I deprive myself of the things that I desire, and walk around like a tightly wound clock then I'm exhibiting "self-control."  And the very notion of "self-control" places all of the focus... on the self, on me.  So when I screw up and give in to temptation, it simply reinforces the notion that I can't really "control" myself.  So many people reach this point and either give up altogether, beat themselves up, scramble madly to find the easiest way to "help themselves," or any number of things.

We need a better definition:

Here it is in Proverb form:  "Better a patient person than a warrior, one with self control than one who takes a city." - Proverbs 16:32.
Or how about this one: "Like a city whose walls are broken through is a person who lacks self control." - Proverbs 25:28

Think about your favorite "warrior."  Mine is Maximus from the movie The Gladiator.  Just looking at that movie poster makes me want to quote lines from it. "What we do here, echoes in eternity...!"

What is it that makes us revere the warrior?  Strength? Honor? Valor? Legend?  Don't these things fade? Do they become tarnished from time to time when the warrior is discovered to be something he isn't?  Even in my favorite warrior movie, Maximus dies in the end.

And what about the imagery of The City?  You see, in the ancient world if you wanted to sack a city that you were besieging (because that's what people did back then all of the time... besiege and sack, besiege and sack), you punched holes in the city walls---a lot of them... too many to defend.  Once this happens anything or anyone can come and go as they please without a by your leave.

What these Proverbs are trying to teach us is simply this.  Impetuous actions and words are the outpouring of a heart that is empty of all vision.  You might look like a warrior on the outside, you might lead everyone to believe that your defenses are sound, but if there is nothing on the inside but emptiness, it won't take long for the outside to match.  Cities fall, warriors grow old, power changes hands... Self Control, the kind that we see exhibited here, cannot be taken away.

The Apostle Paul paints a portrait of a person with real and true self control.  It's the last in the list of the aspects of the Fruit of the Spirit for a reason.  Without it, it will be difficult to let the other aspects grow and flourish.  And what Paul intimates here is that without Christ, your defenses can only hold for so long.  You can only rely on your own strength for so long. At some point as you keep trying to do it on your own, you will grow empty.  And soon enough your outside will match your inside.

Those who exhibit the Fruit of the Spirit, who are walking with Jesus Christ, who have wagered everything on a relationship with Him look something like this:

There are no holes in their defenses
They are the same on the outside as on the inside--and the inside is full of the Spirit
They are strong because they recognized they were weak
They overcome with the power of Christ because they are walking with Him on a daily basis.

Our prayers need to change.  We need to stop praying for self-control, stop praying that God will deliver us from our addiction to drugs, to alcohol, to pornography, to bad relationships, to work, to chasing after our own happiness and our own desires...  We need pray instead that God would draw us closer to his Son because it is only when we are close to him that we will bear fruit that will last.