"The Christian Athiest" a Review 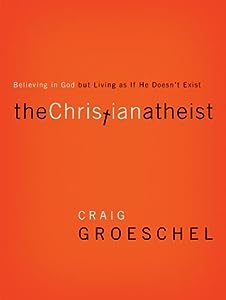 Cover via AmazonThe Christian Atheist: Believing in God, but living as if He Doesn't Exist; Zondervan, 2011
First, I must say this.  Craig Groeschel is a handsome man.  He also works out pretty hard at the gym, and has a past where he behaved poorly with frat brothers before becoming a Christian and (several days later, it seems), a mega church pastor.  Click the in-text link if you want to gaze at him.  I don't want to adorn my blog with his pic because it will make me feel bad about myself... a bit.

Craig Groeschel is the pastor of Lifechurch, a multisite church based in Oklahoma and the author of several best-selling Christian books.  He's also a former minister in a mainline Protestant denomination, who fled the denominational scene, planted a church that met in his garage and is now one of the rising evangelical voices in the Church today.

The Christian Atheist is part confession, part call to repentance, part sermon series, part small group study, part church development tool, part study guide... It's a lot of things.  The basic premise that Groeschel sets forth is that there are plenty of people who call themselves Christian, but who basically deny God and the essential tenets of the Christian faith by their actions.  In a very refreshing way, Groeschel admits that he, too, is a Christian Atheist from time to time--that he struggles with the very same issues that he's illuminating.

The Christian Atheist is a very practical book.  And when I say practical, I mean that it deals with real issues that many people raise when they are struggling with Christianity.  Though it's masked in an accessible and easy-to-read format, The Christian Atheist deals with some very serious theological issues like, the Sovereignty of God, Salvation, Atonement, Redemption, Materialism, Trust, Evangelism, Ecclesiology and much more.  Embedded in each of these theological issues are questions that each of raises like, "What if you believe in God, but you don't think God is fair?" or "What if you believe in God, but you don't really believe in prayer."


This is the sort of book that as a pastor I would definitely enjoy having my entire congregation read.  It would be a great small group study guide and it's also good for pastors who need a little jolt into the reality of what their members might be dealing with on a daily basis as they try to follow Christ.