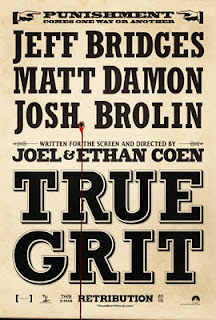 I recently posted a review of Kathleen Falsani's awesome book, "The Dude Abides: The Gospel According to the Coen Brothers."  (If you missed it, you can find it here.)  The Coen brothers (Joel & Ethan) are the writer/director duo who have given the cinematic world soon-to-be-classic gems like Raising Arizona, O Brother Where Art Thou, Fargo, No Country For Old Men and some "you have to be a fan to love them" movies like Barton Fink, The Hudsucker Proxy, Intolerable Cruelty & Ladykillers.

Falsani, a religion writer for the Chicago Sun-Times, points out that there is a thread of theology that seems to weave it's way through all of the Coen brothers works.  In her opinion, each of the Coen Brothers movies is a morality tale of sorts.  There are heroes aplenty in the Coen's films, although many of them are flawed.  And good doesn't always seem to triumph, but it is easily recognized.  God also seems to find his way into their films.  And the Devil, too.  And, according to Falsani, Redemption always plays a major role in the Coen's work--perhaps even a starring role.

Too bad that Falsani couldn't have waited to include the Coen Brothers latest movie, True Grit in her book.

True Grit first appeared as a story in serial form written by Charles Portis that appeared in the Saturday Evening Post in 1968, and was later adapted to the screen.

Portis' story is narrated by Mattie Ross, an old woman in 1928, who tells the tale of how she avenged her father's murder by hiring a one-eyed, broken, drunkard of a U.S. Marshall named Rooster Cogburn to track down the killer, a man named Cheney.  They are joined along the way by a Texas Ranger named LaBoeuf, who is also hunting Cheney for the murder of a Texas senator.

The original True Grit movie (1969), starring John Wayne as Cogburn and (believe it or not) Glenn Campbell, as LaBoeuf, was not a faithful remake of the fine book by Charles Portis.  It would, however, earn Wayne his only Oscar (he actually beat Peter O'Toole, Dustin Hoffman, Jon Voight &
Richard Burton).

Much has been made about how the Coen Brothers remake with Jeff Bridges reprising Wayne's signature role and Matt Damon as LaBoeuf (pronounced "LaBeef") is more faithful to the book.  It is a darker sort of film than the original, to be sure.  And it is narrated by the adult Mattie as well as being set in the Rockies where the book had the characters roam.

What makes the Coen Brothers update of True Grit an instant classic, however, has less to do with how faithfully they follow Portis story as it does with the acting of Bridges and young Hailee Steinfeld, who plays Mattie.  If Steinfeld doesn't win an Academy Award for her portrayal of the headstrong, determined Mattie, it will be a shock.   For that matter, if Bridges doesn't win two in a row (he won last year for Crazy Heart which was an awful movie despite his tour-de-force acting), I'll be surprised.  John Wayne played Rooster Cogburn.  Jeff Bridges is Rooster Cogburn.

Mattie's quest to find and bring Cheney to justice is not motivated by hysterical revenge.  In fact, Mattie approaches her revenge in much the same way she approaches everything--calculatingly, cooly and with unbelievable... well, grit.  Though she doesn't recognize it at first, she finds in Cogburn a soul-mate of sorts.  It's true that Cogburn is a drunk with a past.  His brokenness and flawed heroism is revealed in the patch that covers up his lost eye--a sign of a sinful past, perhaps.  But in the end, he has the true grit that Mattie sought when she hired an avenging angel.  Before her quest is done, however, Mattie is forced to confront her own sense of right and wrong, and discovers that justice--even the kind we believe to be true and right--exacts a price from those who seek it.

The message of True Grit is full of theological implications.  Redemption, we come to understand, comes at a cost.  Vengeance is best left to the Almighty.  Justice is not what we believe it to be, but then again neither is Mercy.

True Grit has it's share of surprises when it comes to the supporting cast of characters.  Matt Damon turns in a remarkable performance as LaBoeuf, a foppish, proud Ranger, with an odd nobility.  Josh Brolin (who starred in No Country For Old Men) is the despicable Cheney and a barely recognizable Barry Pepper plays Ned Pepper, a ruthless but honorable gang member.  For Coen brothers fans, be on the lookout for Coen film alum J.K. Simmons in not one, but two cameos!