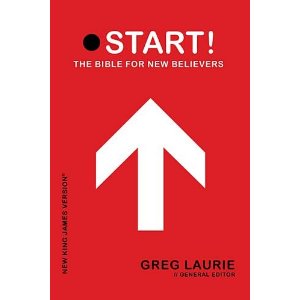 Greg Laurie, the General Editor of the Start! Bible, is the senior pastor of Harvest Christian Fellowship in Riverside, CA, "one of the largest churches in America."  Laurie's touch is seen throughout the Introduction of this Bible, which is marketed to be given to new or non-Christians.   Start! is filled with both "Know" and "Grow" notes throughout the text.  The "Know" notes highlight passages of Scripture throughout the Bible that are central to Christian teaching and doctrine.  The "Grow" notes illuminate certain verses or passages with lessons geared toward beginning believers.  Each book of the Bible is provided with a basic, informative introduction that is designed to give the reader a deeper understanding of the context and the purpose of the book, without a great deal of overly educated language.  The one criticism I have of this version of the Bible is that Laurie and his team of editors chose to use the New King James Version of the Bible.  Not only is the language of the NKJV archaic and formal, it is not the choice I would have made for a Bible that is intended for people who aren't that familiar with it in the first place.  Eugene Peterson's The Message would have been a better partnership for a version of the Bible that is more easily understood.  Having said that, I applaud the efforts made here by Thomas Nelson and Laurie.