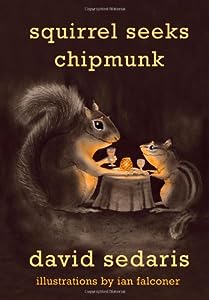 I first discovered the wit and wisdom of David Sedaris when I took an undergraduate English Lit course called "Articles & Essays."  Sedaris' book Naked was one of the assigned texts.  I laughed until I cried when I read it.  Then I gave it to my wife, who laughed until she cried when she read it.  We bought Barrel Fever and laughed and cried together---but at different times.  I laughed a lot less with Me Talk Pretty One Day, but I couldn't put it down.  When Dress Your Family in Corduroy and Denim and When You Are Engulfed in Flames were released, I faithfully purchased them.  It seems that anything that Sedaris writes, I am compelled to read.  And not in a weird, fanboy, gotta-read-it-cuz-he-wrote-it kind of way.  The reason why I love Sedaris' work is because it's amazing.  He has an uncanny gift for reflection on life, the universe and everything that simultaneously engages and challenges the reader.  Sedaris finds humans and human nature fascinating and horrible all at once.  In Sedaris estimation, the world is full of train wreck moments that are impossible to pry your eyes from,  and most of them happen within fifty feet of us if we are aware enough to see them.

David Sedaris is also a regular contributor to The New Yorker and Public Radio International's This American Life, where he reads his work for broadcast over the radio and online.

I suppose it's Sedaris' fascination with humans and their bizarre nature that prompted him to write Squirrel Meets Chipmunk.  This collection of short parables places animals in "human" situations with surprising and often uncomfortable results.  You will meet a gossipy baboon hair stylist, who is willing to defame everyone she knows to find something in common with her cat client.  There is a bear, who wallows in grief and self-pity to her own detriment.  An Irish Setter lives in a loveless, co-dependent marriage.  A crow dupes a ewe with mysticism and religion with tragic results.  A doomed turkey has the last laugh over the selfish, stingy cow who didn't get him anything for Christmas.  And, of course, there is the Squirrel and the Chipmunk from the title story---a mismatched pair that is frowned upon by Chipmunk society.

Like a demented, gleeful Aesop, Sedaris tells these tales in such a way that disarms his human readers before hitting them in the gut with the moral of the story.  Only in Squirrel Seeks Chipmunk there is no revealed moral like in Aesop's fables.  The reader is left to ponder the meaning of the stories on her own.  Despite the fact that the morals are not revealed does not mean that they aren't there.  Sedaris' takes aim at some familiar targets:  Organized Religion, Intolerance, Bigotry, Homeland Security, Family, Ignorance and Relationships.

While Squirrel Meets Chipmunk is a collection of "animal" stories, it is almost certainly not the sort of collection that one would want to read to one's child.  And it's not the sort of book that one reads if one is of a too-sunny disposition.  Like much of Sedaris' work, you sort of have to have a dark side to dig it.  It's not required, of course.  Just useful.