The Next Christians - Gabe Lyons Newest; A Review 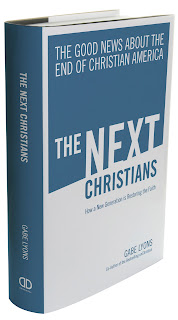 The Next Christians: How A New Generation Is Restoring the Faith by Gabe Lyons; Doubleday (2010)
Gabe Lyons, author of the groundbreaking book unChristian, has taken aim at the majority Christian culture once again and hit it right between the eyes.   In unChristian, Lyons used the data from extensive interviews, polls and surveys to illuminate the views of emerging generations regarding Christians and Christianity.  It wasn't pretty.  But it did land Lyons a bunch of speaking gigs at church and pastor conferences.  Everyone wanted to know why emerging generations in our culture thought Christians were pretty awful, but liked Jesus a whole lot.  And the reason why so many of the people at these church and pastor conferences wanted to know this was quite simply: self preservation.  At some point the clock is going to run out on the church as we know it, Lyons seemed to saying in unChristian, and when that happens---who knows what comes next?  House churches, for crying out loud?

In The Next Christians: How a New Generation Is Restoring The Faith Lyons basically answers the question, "what now?"  I love the title above the title on the dustcover of The Next Christians:  "The Good News About The End of Christian America."   Now there's an oxymoron for Evangelicals if I ever heard one. It is, in fact, the anxiety created by an increasingly secularized society that has placed authors/thinkers like Lyons in such demand on the Evangelical conference circuit.  The Christian Church is justifiably frightened and in need of some sort of hope for the future.

I am afraid that Lyons doesn't really provide the Existing and Dominant Church with the answers that it is probably seeking.  But he does have good news about the "next" generation of Christians.  Lyons begins with the "bad" news:  The world has changed.  Lyons points out that we live in a Postmodern, Pluralistic and Post-Christian culture, and Christianity in the West, which has become based on some poor assumptions about the way the world ought to work, has not responded well.

Lyons assesses the current state of Christianity by breaking down "types" of Christian responses to the changing culture.  He divides Christians into two basic categories: Separatist & Cultural.  The Separatists are by far the larger of the two groups and contain, according to Lyons, "insiders," "culture warriors" and "evangelizers."  These subgroups are all defined by their separation from the wider culture in order to maintain the purity of their faith.  Essentially, they believe they have the truth, but aren't willing to carry it across what they perceive to be "enemy lines." The Cultural Christians have become integrated into our wider culture in such a way that they can barely be distinguished from "nonChristians."  They include "blenders"who place an emphasis on fitting in to their contexts and "philanthropists" who focus on doing good works for the sake of doing good works, not necessarily for the purpose of evangelism.  In Lyons estimation, maintaining these two groups will prove to be disastrous for the future of the Church.

There is a third category, however, that Lyons focuses on---one that he believes is growing and is the hope of Christianity in the future.  He calls them Restorers.  He asserts that this "new" category of Christian envisions "the world as it was meant to be and they work toward that vision."  He goes on to say that "Restorers seek to mend the earth's brokenness.  They recognize that the world will not be completely healed until Christ's return, but they believe the process begins now as we partner with God."

For the remainder of the book, Lyons outlines how the Restorers are already making a difference.  He contrasts them with the way Christians in Christendom (a society based on the assumption that Christianity is the prevailing guideline) have historically acted.  These new Christians are:  Provoked to action not Offended by "the world."  They choose to Create instead of just Criticize.  The Restorers understand that ministry happens everywhere and that they are Called to vocation and holy work rather than just Employed at a job.  Additionally, the Restorers are demonstrating how Grounded they are in the spiritual disciplines of their faith, rather than being Distracted by the dominant culture as their forebears have been.  They also prefer Community over Individuality, which is in sharp contrast to the way Christian culture has unfolded in America.  As opposed to the "blender" group of Christians, the Restorers choose to be Countercultural rather than "relevant."

I HIGHLY recommend The Next Christians for church leaders, pastors, youth directors---pretty much anyone that is engaged in leadership in the Church.  Unlike so many of the recent critics of Christianity in this emerging culture, Lyons spends less time critiquing what was and offers a broad vision of what could be if Christians embrace transformation.  His frequent use of real examples of Restorers in action lend a great deal of credibility to his argument, but also serve as a source of inspiration for the reader.

Buy this book!  You can click on the link to the above left to do just that...

Christian Christianity Evangelicalism Jesus Religion and Spirituality unChristian: What a New Generation Really Thinks about Christianity... and Why It Matters