Third Sunday of Advent - "Get Pumped!" 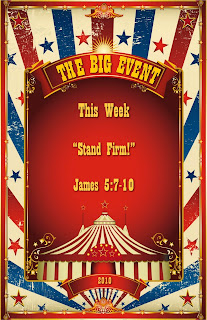 This week is the 3rd Sunday of Advent.  Christmas is almost here and I haven't even really started my Christmas shopping.  I haven't even put up my tree yet, to be honest.  The Lowe's was out of good ones when I went to buy one the other day with the wife and kids.  We could have bought a scrawny looking Douglas Fir that was losing needles like crazy, but we decided to wait until the new shipment of trees came in from "up North."  Sadly, two days later the truck still has not arrived due to bad weather.  Bah.

The irony that this was not expected during a season of expectation is not lost on me.

The lectionary text that I am preaching from this week is James 5:7-10.  When I chose the texts that I wanted to preach from this Advent, I purposefully chose the ones that seemed like they were shouting. Something tells me that if James was being written today and sent via email that most of this passage I'm about to share would be in all caps.  In fact, I am going to put the portions I believe would be in all caps... in all caps.


7 Be patient, then, brothers and sisters, until the Lord’s coming. See how the farmer waits for the land to yield its valuable crop, patiently waiting for the autumn and spring rains. 8 YOU TOO, BE PATIENT AND STAND FIRM FOR THE LORD'S COMING IS NEAR. 9 DON'T GRUMBLE AGAINST ONE ANOTHER, BROTHERS AND SISTERS OR YOU WILL BE JUDGED. THE JUDGE IS STANDING AT THE DOOR!  10 Brothers and sisters, as an example of patience in the face of suffering, take the prophets who spoke in the name of the Lord.

See?  Am I right about this?

I love that this week's Advent scripture shouts at us.  No one expects to get shouted at prior to Christmas.  Especially when it's about being patient and persevering, standing firm and not grumbling or judging one another.  Not exactly Christmas cheer sort of fare.

But the writer of James was writing to a group of Christians in the first century who had lost their resolve.  They were wavering in the face of adversity and hardship.  So he felt that the first century version of all caps was the way to go.

What happens when groups or teams lose their resolve?  I mean the obvious answer that is right in front of our face is simply:  they lose.  But what happens?  What are the ways that we show our resolve has hit the skids?

I think members of a group or team that has lost it's resolve lose patience right out of the gate.

We need look no further at the number of football coaches that got canned this year halfway through the season.  At some point the fans of the team, the owners and the stakeholders get weary of losing.  Someone has to get blamed, and more often than not it's the coach.

Once the members of a group or team begin to lose patience that's when the second guessing begins.

Perhaps the greatest Biblical example of this is the many times the Hebrew people turned on Moses as they wandered through the wilderness.  Any leader knows what this feels like when things don't exactly turn out the way they expected in their organization, group or team.  Almost immediately the direction of the group is placed into question, followed quickly by questions about the leaders qualifications, intent, plan, etc., etc.

After group or team members lose resolve, patience and start second guessing they start turning on one another.

The Pharisees of Jesus' day were great examples of this in action.  They had grown weary of the way their fellow Jews were living and believed that it was due to their inability to keep all of the Laws of Moses that the Jewish people were in virtual slavery.  Their patience for a new day had worn out, they second guessed the ways that things had been done and began to turn on their fellow Jews.

We see this kind of thing happening in Christian circles far too often don't we?  For the most part we have lost our resolve.  We've forgotten what we have been placed here to do as we wait for the coming of the Christ.  We've grown impatient and have moved from expectancy into comfort.  We second guess the very calling that Jesus himself gave to his disciples and overthink what it means to be truly Christian.  And then we turn on one another in the most spectacular displays of disunity that could be imagined.

We need a good halftime speech.

I love the speeches that coaches give their teams before games and during halftime to pump them up.  Here's a couple that lit me up this week:


Seriously, that one makes me want to go hit someone. I love it.

Here's another one--the one that I am actually using in my sermon this week from the movie Miracle about the 1980 U.S. Olympic hockey team:

The key verse in the passage from James is verse 8: "you too be patient and stand firm, for the Lord's coming is near."

But there's more to this passage.  When we begin with verse 7 we see that followers of Christ are compelled to live in expectation.  The "parousia" is coming, they are told.  The "parousia" is what is known as the very presence of Christ.  The writer uses the metaphor of rain to help them understand the expectations they must feel.  In the ancient world the expected rainy seasons were the lifeblood of their world.  For the Hebrew people the promised rains reminded them of the faithfulness of God.  We can live in expectation, the writer is telling us, because God is faithful.

In verse 8---our key verse--the phrase "stand firm" is literally translated: "establish your hearts" and it means to set your heart so firm that it is unshakable.  Not only are we called to trust and to expect, but we are also called to hold the line, to be unshakable in our faith, to not waver.

Verse 9 references what the Greeks called "stenazo" which means grumbling or groaning that is connected to frustration.  The Apostle Paul calls this "murmuring" in another of his letters and he says that "some of them murmured and were destroyed by the destroyer."  That's pretty dang harsh punishment for grumbling.  I daresay that if the same punishment were meted out to those of us who call ourselves the Church there wouldn't be many of us left.

In verse 10 the author of James exhorts his readers to be like the prophets.  Considering most of the prophets met untimely ends and were martyred for their pains, that doesn't seem like a warm and fuzzy thing to ask people to do.  But in the ancient Hebrew mindset this kind of exhortation was filled with cultural meaning.  The same sort of speech was often given as a means of encouraging those who were in the midst of dire need.  It has it's origins in the Maccabbean revolt around 200 B.C. when a foreign king tried to force the Jewish people to give up their practices, traditions and their Scriptures.

In the end, like most things during the season of Advent, this all comes down to expectations.

When Christians lose their sense of expectancy that God is going to do something wonderful and beautiful in the world, they lose their resolve shortly thereafter and with it their sense of purpose and meaning.  It's time we took the halftime speeches we hear in James to heart.

I love the end of the Georgia Tech chaplain's speech to the team.  He has them repeat the words his Middle School coach taught him and that he has remembered all these years later:  "We going to fight until we can't fight no more.  We going to lay down and bleed a while.  And then get up and fight some more."

Say it with me.