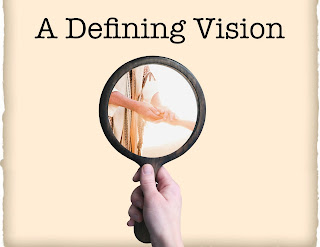 This week I am concluding a two-part sermon series on the vision of our church.


I have to confess that I have sweated over these two sermons a lot more than I thought I would.

I decided at first that the best way to approach them was to think like a prophet.

But when I thought about what happened to the prophets---they were reviled, stoned, imprisoned and basically ignored---I wondered if my strategy might have a flaw in it.

There is something prophetic in casting vision, though.  Especially if the vision that is being cast is a holy vision.  I imagine that sounds a bit pretentious to some, but let me explain.  When I say "holy" I just mean something that strives to be as close to God as possible.  A holy vision is one that is unmistakably God's.  There's no way that someone could equate it with anything else.

In other words... it sounds a little crazy.  It seems impossible to reach.  To think about such a vision brings both the chill of fear and the thrill of unbelievable joy.


When I asked our church leaders two years ago, "if we ceased to exist [as a church] who would miss us?" some of them admitted that only our "own people" would be among those sad to see us go.

And that is why we believed that God is calling us to embrace this vision:  TO REFLECT AND REVEAL THE UNSELFISH LOVE OF CHRIST.

And this has not been without it's challenges.  I have discovered that while most Christians seem open to the idea of being a self-less church when the reality of what that means hits them they lose their enthusiasm.


Over a year ago, one of our church members gave me the book Same Kind of Different As Me.  I put it on my nightstand in the stack of books that I was going to read when I had time.  I don't know what caused me to pick it up one day, but I did... and then I didn't put it down until I finished it.

At some point as I was reading the book, I was overwhelmed with the vision of our entire church reading it together.  "Coincidentally" I had recently begun twittering with a publicist from Thomas Nelson publishers, who published Same Kind of Different As Me.  I twittered her with my idea and she gave me the name of someone, who took an order for 150 books over the phone and in two days they arrived at my office.


I am fairly sure that over 250 people read the book.  If you want to know more about it, you can follow this link for the video: http://www.youtube.com/watch?v=XbB82fv6OsM

At the heart of the book was the answer to the question, "What happens when we answer God's call?"  It's also about the power of forgiveness, and unselfish love as well as the strength of vision and how important it is for your vision to actually match what you do.


Not to mention... it made me bawl like a baby.

I don't know why God led us to encourage 250 people in our church to read Same Kind of Different As Me.  I don't know how many lives it changed, or how many other people bawled when they read it.   I also don't know what would have happened if we hadn't read it.  Who knows?  Maybe just maybe we wouldn't have been able to say that more than just the people who gather on Sunday morning for worship would miss our church if it was gone.

If you want to reflect the unselfish love of Christ, you have to actually be close enough to Jesus to catch his light.  That was the first step for us, I think.  We decided that we needed to take step closer to Christ and the people that Christ loves.

But it doesn't end there.   If you want to reveal what you are reflecting, you have to step beyond your comfort zone and live out your faith wherever you happen to be.

The scripture I am teaching from this week in Colossians addresses what this should look like for the church.  The Apostle Paul gives the church at Colossae a whole list of things that they need to do in order to reveal Jesus to the world.  And then he hits them with this, "and whatever you do whether in word or deed do it all in the name of the Lord Jesus, giving thanks to God the Father through him."


When you break it down, though, Paul keeps it sort of simple.  First, he asserts that a church needs to be filled with humble people.  The word that Paul uses here is a cool Greek word: tapeinophrosyne which is connected with only the most contemptible sort of servitude.  Second, Paul says that the people of the church should be gentle--exercising the kind of courtesy and willingness to waive their rights rather than be concerned with personal interest or gain.  He also says that churches should be filled with people who are patient--making allowances for others shortcomings and tolerating their exasperating behavior.


I have to tell you (sarcasm is about to happen), this sounds (here it comes...the sarcasm) like EVERY church (wait for it) that I have ever known (THERE...right there...sarcasm).

As Paul indicated, when those who call themselves Christians commit to revealing Jesus in this way they are led--no, compelled--to respond by engaging in Worship, living out the Word of Christ and reaching the World with Christ's unselfish love.

1st.  Our worship isn't about our feeling good and getting what we want every Sunday.  It's not about the correct ratio of prayers to hymns and a sermon that only lasts for 20 minutes and no longer because we can't sit more than an hour in church (even though we'll sit on the couch for hours at a time watching "Real Housewives").  Worship is a response to the Gospel that demonstrates the centrality of Christ.  It's purpose is to form and shape the community to embody Jesus.

2nd. We are called to live the Word of Christ through our own words and our deeds.  In other words, we actually ask in all seriousness "What Would Jesus Do?" in every aspect of our lives and the people who encounter us are blown away by how humbling and self-effacing that is for us---not driven away by our holier-than-thou attitude.

3rd. We don't live in separate spheres when it comes to faith and life.  Our faith should be the sphere that surrounds every other sphere of our existence... work, school, politics, church, family, you name it.  And we shouldn't be apologetic about it.  We shouldn't be arrogant either.

This is our vision.  To reflect and reveal the unselfish love of Christ.  It's a journey that we are all taking together.  And I know that along the way, some folks might decide that the journey is too much for them.  I get that.  Some people may decide to turn back.  I get that, too.  It grieves me, but I get it.

The same thing happened to the Children of Israel in Exodus when they escaped Egypt miraculously and then found themselves at the edge of the Red Sea with Pharaoh's army behind them.  They immediately started crying out to Moses and complaining about how he had brought them there to die. These were people who had seen unbelievable signs and wonders.  God had gone before them as a pillar of cloud by day and pillar of fire by night.  I wish that God would do that for me sometimes. I mean wouldn't that be flipping sweet.   Despite all that they had seen, the Red Sea Complainers were in full force on the edge of that water. "Didn't we say to you in Egypt," they said to Moses, "Leave us alone; let us serve the Egyptians?  It would have been better for us to serve the Egyptians than to die in the desert."

Then Moses tells them... "Do not be afraid.  Stand firm and you will see the deliverance the Lord will bring you today.  The Egyptians you see today you will never see again.  The Lord will fight for you; you need only to be still."


I love this.  I also love what it teaches us about having the courage to be the new community of Christ that we have been called to be.  We need to be close to Jesus to reflect His unselfish love, and unified through His peace to reveal Him to the world.