Faith & Doubt Week One: "You Can't Have One Without The Other" 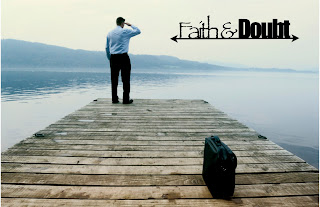 One week and one day ago today my wife and I welcomed our newest little guy into the world: Jacob Andrew Michael Bloder.  At almost 42 years of age, I have thought more than once that we were both insane to even attempt to have another child.  I am fairly certain I am going to be that guy who shows up with his son on his first day of kindergarten and the teacher will say, "Oh, Jacob... how sweet that you brought your grandfather with you!"

The moment that Jacob was born, I was reminded once again of the unbelievable grace and love of God.  It was a miracle to watch, and an even greater miracle to hold him.  Even now as I watch him sleep in his little bouncer just inches from my computer I am blown away by him.  In his nursery we put the following quote from the Psalms on the wall right above his dresser, "I am wonderfully made."

I learned some things through my son's birth--things that I thought I knew, but that I needed to be reminded of.  First, you should never ask your wife when she is in labor, "Did that hurt?"  Just to be clear, that is never a good idea.

Second, and more seriously, I also learned what a fragile and beautiful thing that faith is, and how intricately faith and doubt are connected.  My son's birth was an unbelievable faith-affirming moment.  My wife being wheeled into the Operating Room afterward because of complications was not.  I will never forget the way I felt when I sat in the Labor and Delivery room all alone and holding my minutes-old son to my chest.  All I could do as I pressed my face against my baby son's was to whisper to the God who had just given him to me, "Don't take my wife.  Just don't."

I met someone recently who lost their child in a terrible accident.  She, her husband and her 10 year-old boy were riding bicycles while on vacation.  She watched as her son was struck and killed by a Coca-Cola delivery truck.  I can't imagine what she must have felt as she held her son in her arms on that day.

Every single day people pray for healing, for God to intervene, for God to make things right...  And some of them have their prayers answered and their faith affirmed, and others do not.  On the one hand there are people who feel the presence of God all around them, and on the other there are people who ask that painful and unanswerable question: where is God when you need him?


When I was growing up, the faith communities that I was a part of had no room for doubt in their theology.  If you expressed doubts about God then you probably weren't really "saved." But what I have come to understand is that faith and doubt exist together.  I read this recently: "Doubt is not so much a dividing line that separates people into different camps as it is a razor's edge that runs through every soul."


Let's take it a bit further...  perhaps the best way to strengthen faith is to acknowledge doubt.

Elie Wiesel, Jewish author and Nazi concentration camp survivor was forced to confront his doubt in the midst of the horrors he experienced in the Holocaust.  Afterward he wrote, "...no faith is as solid as a wounded faith."


In Matthew's Gospel there is a story of how Jesus healed a young boy, who was tormented by an evil spirit.  His disciples had tried to heal the child first, but had failed.  When Jesus arrived on the scene, they were arguing with the religious leaders who had gathered there over the "techniques" of faith, and the proper way to heal.  The boy's father sees Jesus and immediately runs over to him. He tells Jesus that his disciples had tried to heal the boy, and couldn't to which Jesus replies--probably staring down both his disciples and the religious leaders, "You unbelieving generation... how long do I have to put up with you?"  The boy's father then says to Jesus, "If you can, heal my son."

I love what Jesus does next.  "If I can? Everything is possible for the one who believes."  The man had come to Jesus not because he trusted him, but because he was desperate.  When Jesus says these words to the man, you can almost see the glimmer of faith begin to shine in him.  But his doubt still remains.  "I do believe," he confesses, "help my unbelief."

This is the wounded faith that Elie Wiesel spoke of... the kind of faith that exists in the midst of doubt.  It's the substance of hope and the evidence of the invisible.  Jesus heals the boy in the next moment and sends the man and his son on their way in joy.

When the disciples have a moment later with Jesus after he heals the boy, they ask him "Why couldn't we heal him?"  Jesus replies, "This kind can only be overcome with prayer."  The disciples had taken for granted that the power given to them didn't need tending.  They believed that it was somehow inherent in them, and that they should just be able to wield their new found power when and as they saw fit--without prayer, without humility, without God.   I get that because I see myself in them. I feel sometimes that God "owes" me for being a good person--that I should just be able to get a free pass on the difficult things in life.  And when it doesn't happen that way...  I wonder what God is up to.  Or if God even cares.  Or if God is even there at all.


Funny isn't it... how we go from such confidence to none in the blink of an eye or the turn of a screw.  When all along we should be begging God, "I believe... help my unbelief!"


If the story in Matthew is about faith, then it's conclusion is about prayer, and the importance that prayer plays in our struggle to have faith in the midst of doubt.

Prayer is not a magical incantation, mind you.  It's total openness to God's actions in us and through us.  And here's something else that the disciples in the Matthew story (and the religious leaders, too) didn't get:  Faith is not about "techniques" it's about reception.  Openness and reception sound like the same thing, but they are not.  Openness is a state of mind.  Reception is a state of listening.  When I am open to the moving the Holy Spirit and willing to listen for the voice and leading of God, even in the middle of the worst moments of my life, I can still say, "I believe... help my unbelief."