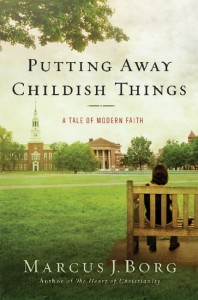 Putting Away Childish Things: A Tale of Modern Faith by Marcus Borg; HarperOne, 2010
I first discovered Marcus Borg when I was attending McCormick Theological Seminary and enrolled in a class, "The Quest for Jesus."  It was in this class that I was introduced to Borg's works, Meeting Jesus For the First Time and Jesus.  I also learned about Borg's involvement with The Jesus Seminar, a much-maligned, groundbreaking, oft-controversial group of scholars, theologians, sociologists, etc. that focused on discovering the historical Jesus.  Borg's scholarship has been alternately praised or attacked, depending upon which sort of Christian community happens to be reflecting upon it.
Putting Away Childish Things is a work of fiction--Borg's first novel, to be more precise.  Borg describes it as a "didactic" or teaching novel.  The characters within the story struggle with issues of life and faith in an academic setting and within the context of our emerging culture.  And it is through the characters themselves that Borg teaches and reflects on a number of issues that are at the forefront of Christian thought and discussion of late:  the Lordship of Christ, the Authority of Scripture, Sexuality, to name a few.

The story centers around Kate Riley, a popular, middle-aged religion professor in a small Wisconsin liberal arts college.  When Kate is offered a visiting professorship at a seminary for one year, she is forced to face more than a few of the issues in her life that she had previously been avoiding.  Her journey of discovery soon leads her back into the life of her former professor, Martin Erickson, with whom she'd had an affair when she was a young graduate student, and into a puzzling conflict with the chairs of her own department.  We are also introduced to Erin, a conservative, Christian young woman struggling with doubt, who enrolls in one of Kate's classes on "Religion and the Enlightenment." The last addition to this "trinity" of characters is Martin himself, a well-known and renowned theologian, author and seminary professor--whose seminary happens to be the one courting Kate for the one-year appointment.
First, I have to say that this novel feels like a love letter of sorts to Academia from Borg.  The fondness that he feels for the classroom, the campus, the collegial give and take with colleagues and his obvious
"soft spot" for students shines through every pore of the book.
Borg masterfully weaves some fairly deep theological discussion into the dialogue of his characters--using their voices to speak plainly about about the transformation of faith, the Church and culture in this post-postmodern era of history--an era that has been described by many as post-Christian.  And he does so in a way that is bound to generate conversation and dialogue rather than end it.  While Borg's personal theological bent could best be described as "progressive" he does not portray the more conservative Christian characters in Putting Away as caricatures or as evil, narrow minded people.  Instead he offers up characters that are multi-layered, complex people doing the best they can to live faithfully and well.
Critics of Borg will undoubtedly say that Putting Away is just another shot below the water line of conservative Christianity from one more member of the Christian "left."  I tend to see it differently.  I see this novel as an ingenious way to open up dialogue between Christians of differing points of view, and as a window into Borg's understanding of what it means to be truly Christian in a world that has become rather inhospitable to Christianity and it's claims.  Putting Away also gives the reader a glimpse into Borg's own understanding of the importance of Jesus, not just as a pivotal figure in history, but also as something far greater and more important to both Christians and non-Christians alike.
I was pleased to discover that Borg had also included discussion questions, and a guide for reading groups.   This book is sure to generate some great discussion.  I would feel good about recommending it to small groups at a church, book clubs, and even to Christians to give to non-Christian friends as a way to open up conversations about the particular claims of Christianity as seen through a variety of lenses.