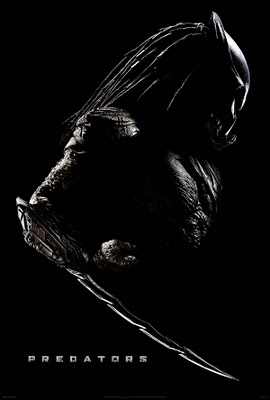 My oldest son and I took a man-trip recently.  We were supposed to drive to NC to retrieve some furniture.  Since we left late in the day, we decided to drive to Atlanta, get a hotel, see a movie and then drive on to NC the next day.  As it turned out, we had to return home the next morning because of serious thunderstorms that would have ruined whatever furniture we had in the pickup.

So basically, we ended up spending like $200 for a 16 hour trip to see Predators in a suburban Atlanta mall.

It was worth it.

Not because of the movie, but because I got to hang out with my son for 16-plus hours and have a man-moment with him at a movie we wouldn't watch with his mom.

However, the movie was pretty good--even if it wasn't 16-hour trip good.  Predators is the kind of movie that you sort of go see without a lot of expectations.  I've seen all of the Predator movies and all of the Aliens vs. Predator movies.  I like them.  Sue me.  They're scary and full of action.  These are two things that make me happy in a movie, especially one that I am watching just for straight up entertainment.

That's why I was so pleasantly surprised that Predators actually had a decent story line to go along with the scariness and the action. And even though I was skeptical that Adrian Brody could pull off an action hero role, he did just that.

Predators was produced by Robert Rodriguez, one of my favorite directors, who is now wearing a new hat.  Robert Rodriguez does not play by the rules--at least the Hollywood rules.  Check out this crazy list of his films: From Dusk to Dawn, Spy Kids (Franchise), Planet Terror, Desperado, Sin City...  This is a guy who was responsible for such kid-friendly romps as Shark Boy & Lava Girl but also has directed some seriously violent, guy-fest films (several with Quentin Tarantino). Nimrod Antal, who has only two nondescript films under his belt, stands in for Rodriguez here and does a masterful job.

Predators opens with black-ops agent Royce (Brody) falling from the sky unconscious.  His chute opens automatically and he half-crashes/half-lands in a jungle very nearly on top of several other dangerous people--all of whom fell in the same way.  Royce finds himself accompanied by a Russian soldier, a Mexican drug cartel enforcer (Trejo), a member of a Sierra Leone death squad, a Japanese Yakuza (mafia) member, a convicted murderer and rapist, a special-ops idealist who also happens to be female (Braga) and inexplicably (at first) a doctor (Grace).  Lawrence Fishburne has a nice little cameo as former U.S. soldier who has been on the planet for far too long.

The group realizes pretty quickly that they aren't in Kansas anymore--or on Earth.  They also figure out that they are the prey in a perverse hunting game that is being conducted by the ubiquitous Predators.  They've also all been armed with weapons they are proficient using.  And each of them was abducted in similar fashion from Earth.  What ensues is an action-packed, tense and oft-gory struggle between "good" and "evil."

While this isn't a family friendly movie by any stretch of the imagination, there are plenty of lessons to be learned within it.  Each of the humans being hunted are flawed (some to a grotesque level).  Each of them is given the opportunity for redemption--which sometimes comes through sacrifice.  Some rise to the occasion and others don't.  I don't want to spoil anything here, so I can't say much more than this... In the end, there is a Genesis moment, a chance for the survivors to discover their true identity, and perhaps be delivered out of what might be considered as "hell."

A nice touch by director Antal was the song that he placed at the closing credits: Little Richard singing "Long Tall Sally."  This was the song that Ahnuld Schwarzenegger and his mercenaries played on a radio right before they jumped from their plane and into history with the first Predator movie from 1987.
Adrian Brody film movie review parables Predators redemption Richard Rodriguez