Once Upon A Marriage - Week 3 "For Men Only" 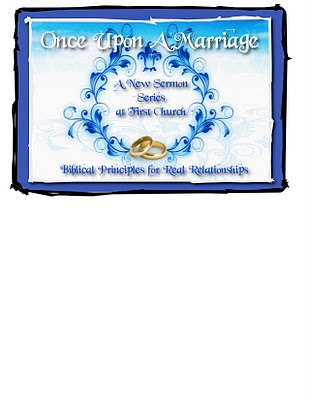 When I planned my sermons for the summer a few months ago, I didn't realize that the day I elected to preach a sermon to "men only" would be Father's Day.  Coincidence?  I think not.

God has a way of showing off when it comes to that kind of thing, though.

At any rate, I started my journey toward the sermon this week by thinking about manhood.  More specifically, I thought about what sort of cultural messages that men receive about what it means to be a "real man." 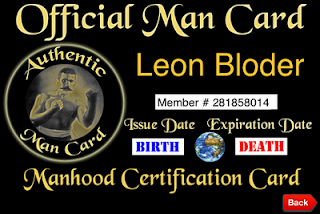 This is my man card.

If my manhood gets called into question (unlikely) I can produce this card and reveal to the world that I am a card carrying man.  Because I have the Man Card iPhone application for my phone, I also have the power to revoke another man's Man Card if he says something like, "I really liked 'The Notebook.'" or "I just knitted a sweater."

Do you know what question men get asked more than any other question?  It's not "boxers or briefs?" if that's what you're thinking.  It's "What do you do for a living?"  You see, our culture defines men by what they do, what they accomplish, what kind of success they are able to attain.  From an early age, men have drilled into them the notion that in order to be a man, they must conquer, succeed, accomplish things and find a career that is meaningful and prosperous.  I think it's so sad that so many men retire and then get asked "What did you do?"  Like they haven't any value now that they are retired.

Interestingly, I heard a report the other day that for the first time in American history, there are more women than men in the workforce.  There are also more women managers of businesses in America right now than there are men.  This is a good thing, and shows some progress, but still men get asked "the question."

So, on the one hand men are getting the message that they need to go out and conquer and vanquish and succeed and then on the other hand they are getting messages (mostly from women) that they need to tone down the testosterone a bit, become more sensitive... you know, get in touch with their feminine side.

I decided to find out what women are saying about how to "handle men" when it comes to this kind of thing so I went to www.e-how.com, which is a place where you can discover how to do just about anything.  I found the following list entitled "How To Handle The Male Ego:"

1. Remember Cultural Influences Inflate the Ego (that doesn't seem so bad...)
2. “Wearing the Pants” - try to make him feel like he does
3. Don’t be Controlling - be subversive and work around it
4. Use Positive Affirmation - men need to be praised
5. Keep the Cutesy Names To a Minimum

This kind of condescending, snarky stuff is pretty prevalent in the cultural messages that men seem to be getting.  But there are serious problems created by the conflicting images of manhood that assault men in our society.

That's why those of us who call ourselves Christians and God-followers need to return to the Bible for some guidance.

I chose Malachi 2:13-16 for my sermon this week.  It's not your typical kind of passage that you would think of when speaking to men about manhood.  That's why I was so blown away when I began to study it.  In this passage, the prophet Malachi is speaking to men.  In particular, to Jewish men who had begun divorcing their Jewish wives in favor of younger, more exotic, more well-connected foreign wives from the surrounding tribes.  They were practicing divorce by "aversion."  They wanted to develop strong economic ties with their neighbors and in the ancient world marriage was a way to do that.  They also wanted to enhance their manly image by sporting a younger woman on their arm, so to speak.  And to top it all off, they began worshipping the gods that these new wives worshipped.

The prophecy starts off with a message from God, condemning the fact that these men are still trying to show up to worship.  "I take no pleasure in your false worship," God tells them.  "You have become faithless and abandoned the wife of your youth."  These men had begun pursuing the cultural definition of manliness at the expense of their families, their wives and their covenant with God.

God finally says, "I hate divorce, and I hate the way that you men cover yourselves with your garments, covering yourselves in violence."  First, let me say this.  There were stipulations for divorce in Mosaic law.  So many pastors, so many churches, so many denominations take the first part of this verse out of context and do violence to it.

But what was happening here in Malachi was not what I just described.  It was a bunch of guys who decided they wanted what they wanted and they were going to get it no matter who they hurt.  In the ancient world when a man wanted to show his intentions of marrying a woman, he would place his cloak over her.  This symbolized that he would do anything he had to do to protect her and care for her... even lay down his own life.  When God accuses the men in Malachi of "covering themselves in violence" he is accusing them of caring only for themselves and their own welfare.

I finished my sermon up with the following guidelines for "Biblical Manliness" as I see highlighted here in Malachi:

1. Companionship
Gifts of time, presence, joy & romance - don't give your joy away to everything else but your wife... try a little romance once in a while that isn't $8 flowers from Publix

Mutual Helpfulness
Genuine interest in the life of another, filling the gaps - When you ask "how was your day?" actually spend the time to listen, and do whatever you can to "complete" your wife or significant other.

Mutual Service
Selfless acts, anticipating needs - don't expect a medal for doing selfless acts of service and try to anticipate when your wife needs something, don't always wait until she asks.

Faithfulness
Cheating takes a lot of forms & not all of them are sexual - Men cheat with their jobs, with their hobbies, all sorts of ways.
Christian living Malachi marriage men's issues