Once Upon A Marriage Week 2: "For Women Only"

I found this picture on the Internet of the "Perfect Woman"

The photo is a computer amalgamation of several photos from some of the most beautiful and well-known models & actresses in the world.  Here's what it looks like:

It got me thinking about all of the screwed up ways that our culture defines "womanhood."

Then there is the way that women are "empowered" to be "like men."  Take a look at this iconic advertisement: 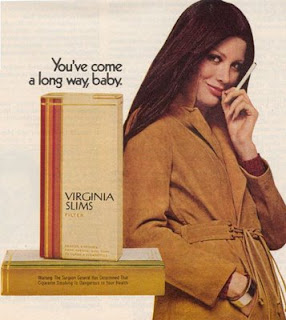 This was an ad for Virginia Slims cigarettes, back in the day when they used to advertise cigarettes.  Virginia Slims was a cigarette "for women," and the marketers wanted women to feel empowered to smoke them.  "You've come a long way, baby" was the tag line.  It seems fairly empowering on the surface.  But like most of the efforts to empower women in our culture it assumes that maleness is the standard that must be achieved.  "Don't feel guilty," the ad seems to say to women, "You can smoke like a man, act like a man, work like a man, dress like a man (if you want), and be just as a good as a man... but still be feminine and sexy and all of the things that you should be to be a woman.  You've come a long way, baby."

I found this fantastic quote: Women are taught to think as men, to identify with a male point of view and to accept as normal and legitimate a male system of values.  – Judith Fetterly

Do you see how this assumes that being "like a man," or "as good" as a man is the best thing to be?

The struggle to live into the ideals of womanhood have been doubly difficult for women who adhere faithfully to their religion--as very nearly every major religion subjugates women in one way shape or form.

While Christianity doesn't have a corner on the market of misogyny, it doesn't have the best track record.  For centuries, well-meaning Christians tend to gloss over the truth of the Bible in favor of interpretations that reinforce their world view.  And since men have dominated the leadership in Christianity for pretty much the last 2000 years, the male worldview is the one that gets all of the play.

I am preaching from Proverbs 31 this week.  It's a familiar passage that usually gets preached on Mother's Day.  Verses 10-31 are subtitled "A Capable Woman."  The unnamed woman described in these verses is an ideal stereotype for the kind of woman that blesses the heart of God and everyone around her.  She is also one of the most famous women in the Bible. If you want to read it, you can click HERE.

But both men and women have taken this passage and done all kinds of violence to it.  I found this video that satirizes how conservative, evangelical Christians feel about this passage of Scripture:

I don't know how we can ever start strengthening marriages in our churches and communities of faith unless we first realize that God has clear ideas of both womanhood and manhood---and God's ideas don't necessarily jive with those of our culture, our religion or our often closely held views of the Bible.

Take the woman in Proverbs 31... Throughout the entire passage, the author uses the kind of language to praise her that was only used to praise valiant warriors in the ancient world.

While there's no denying that the ancient culture of the Proverbs 31 Woman didn't give women equal footing with men, it's pretty clear that she has it.  She is mentioned with her husband in conjunction with "the city gates" not once but twice, which indicates that whatever honor her husband has in the community, she shares.  There is also language that suggests that her husband "married up" and he knows it.

In fact, the phrase "her husband lacks for nothing" holds some meaning that he doesn't even need concubines, which would have been his right in the ancient world.   So this guy, who could have legally had a bunch of women on the side with no repercussions doesn't want them.  He prizes his wife above all else and couldn't dream of being with anyone else sexually.

This Proverbs 31 Woman deals in real estate, owns a business, takes care of her family, pours herself out for the sake of others and is renowned for her substance, not just her appearance.  When people see her, they see the kingdom of God at work.

Like much of the Bible, we see a glimpse not of how things are but how they should be.

Humbly, I would like to suggest the following criteria for "The Perfect Woman" according to what we see in the Bible:

1st - She pursues her true calling:  I get so sick and tired of listening to Christians argue about the role of women in the family.  Women who believe that as a wife and mom they have a Biblical mandate (?) to work in the home often ridicule and deride women who choose a career in the workplace--intimating that they aren't good mothers, and worse Christians.  Conversely, women who choose to serve their families by having a career outside of the home look down on stay-at-home mom's for not fulfilling their potential and obsessing over their children in unhealthy ways.

Enough already.  It's pretty clear that God calls different women to different roles.  Some women are absolutely called to careers outside of the home and others are not.  The "perfect" woman, in God's eyes, is one who is pursuing her true calling with all of her heart, and honoring God as she does it.

2nd -  She finds her true identity in God.  Not in the dominant culture.  Not in patriarchal religious views. Not anywhere but in God.  Because God has a view of how things should be where a woman doesn't have to define herself on a man's terms... or another woman's terms... or anyone's terms but God's.  And God's view of how things should be is expansive, bold, culture changing, paradigm shifting and beautiful in every way.

3rd - She exudes Shalom.  The peace of God reveals the kingdom of God.  The "perfect" woman just demonstrates God's love, mercy, peace and grace with all that she does and all that she says.  This is a place of strength and real empowerment that cannot be denied.
Christian living marriage Proverbs 31 shalom women