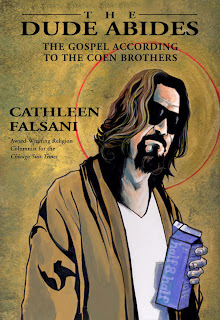 The Dude Abides: The Gospel According to the Coen Brothers by Cathleen Falsani; Zondervan, 2010

Cathleen Falsani is easily one of my favorite writers who also happens to be a Christian.  I rather like describing her that way because it's hard to fit her into the typical "Christian" writer mold.  I also rather like that Zondervan publishes her work, which ensures that it at least gets marketed to a "Christian" audience that quite frankly needs to hear what she has to say.


Falsani is an award-winning religion columnist for the Chicago Sun-Times, and a graduate of the slightly conservative, evangelical, private Wheaton College in Illinois.  She's also the author of a fantastic book of essays on grace, faith, God and everything entitled Sin Boldly.

She's also a huge fan of the Coen Brothers, which endears me to her even more.  The Coen Brothers are the writer/director duo that have been responsible for such Oscar winning movies as Fargo, O Brother Where Art Thou? and No Country for Old Men.  There most recent film, A Serious Man was nominated for an Oscar in 2010.  Currently the Coen Brothers are filming a remake of the classic John Wayne movie, True Grit with Jeff Bridges reprising the role of Rooster Cogburn.  But perhaps their most iconic film, and the one that has had the longest life outside of its release is the cult classic, The Big Lebowski, from which Falsani garners the title of her book.

The Dude Abides is a compilation of 14 essays, each an examination of a different Coen Brothers film.  In fact, Falsani faithfully leads the reader through each Coen Bros film chronologically from Blood Simple to A Serious Man (which had not been released when she wrote the book).  Falsani's purpose for writing The Dude Abides stretches far beyond fandom---though it is clear that she is a serious Coen fan (it takes one to know one as well).  As in much of her writing, Falsani does an excellent job of finding the spiritual in the midst of what so many religious types might consider secular.  She also admires the way that the Coen Brothers weave theology, and "sneaky" morality into each of their films.  She writes,


There is a moral order to the world the Coens create.  Whether the story is a farcical crime caper or an American gothic tale of betrayal, there always are consequences to the characters' actions, for better or for worse.  Bad guys are punished and the decent are rewarded for their innate goodness, though beware the viewer who assumes it will be easy to discern which is which.  Sin comes to light; lies and deception are revealed for what they are.  It may even happen that the hand of God intervenes to restore order from chaos. (17)

The very first Coen Brothers movie that I ever saw was the critically acclaimed Fargo--a supposedly "true" story set in a very wintry northern Minnesota (the Coen Brothers home state).  Fargo is a story of betrayal, greed and murder and what happens to those who engage in it.  It was quirky, quotable and at time shockingly violent.  But in the end it was a pretty straightforward morality tale, with a sweet and innocent soul.

Falsani does an excellent job of structuring her book in such a way that she offers equal examinations of each film---giving them their due, as it were, despite the fact that some of them were not very well received by the viewing public.  She uses the concept of how we often cannot see the forest for the trees as a way of bringing the reader closer to the spiritual truths embedded in the Coen's work.  Admittedly, some of her analysis is stretched a bit because the spirituality that seems so evident in films like O Brother Where Art Thou, and The Big Lebowski are difficult to see in films such as Intolerable Cruelty and Burn After Reading.

If you are a fan of film, and believe as I do that spirituality, theology and faith lessons can be found in art of all forms then this will be a fantastic read for you.  It may make you (as it did me) want to go back and watch all of the films or get the ones that you don't have.

The Dude Abides...  probably the most quotable line from a movie... ever.

If you want to buy the book for your ownself, you can do so by clicking the link above left and letting the wonder of Amazon take you away.
Art book review Cathleen Falsani Christian theology Coen Brothers Fargo O Brother Where Art Thou The Big Lebowski