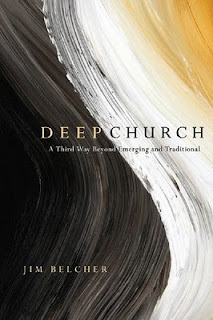 Despite this pedigree that should posit Belcher firmly in the "Traditional Church," he tells a compelling story of his journey through doubt and questions of faith that brought him alongside many of the early leaders of the more progressive and non-orthodox "Emerging Church."  He name drops a bit, and talks about cigar-smoking and theologizing with the likes of Rob Bell, attending conferences in the late nineties with relatively "unknown" church leaders like Tony Jones, Doug Pagitt, Mark Driscoll, Kara Powell, Chris Seay and Dan Kimball.  Many of these pastors, teachers and thinkers went on to form Emergent Village--their response to what they saw as a movement within the church to "emerge" from the 20th Century and the age of Christendom into the 21st and a "post-Christian" society.

Belcher self-identifies as someone who is both an "insider" and an "outsider" to both the Traditional (modern) Church and the Emerging (postmodern) Church.  Belcher also lifts up the conflict that has taken place between the two camps over the past few years, and the violence that it has done to the witness of the Church Universal.   Leaders from both groups have accused one another of heresy, refused to listen to one another, attacked one another publicly and essentially retreated into their corners glaring at each other warily.  Belcher asserts that he realized at some point that he didn't really fit in either camp, but wanted to claim the best of both as a way to move forward--hence his "Third Way."

Belcher's way beyond the impasse between the Traditonal and Emerging churches is something he calls "Deep Church," a phrase that he borrowed from C.S. Lewis.  It becomes very clear as you read Deep Church that Belcher believes his own Redeemer Presbyterian is the embodiment of the "Third Way" he is espousing.

Before he begins his treatise on what it takes to be "Deep Church" Belcher establishes that there are certain foundational issues, which he calls "Mere Christianity" (again borrowing from Lewis), that anyone who identifies as a follower of Christ should believe in common with other Christians.  These foundational beliefs are outlined, according to Belcher, in The Apostle's Creed, The Nicene Creed and The Athanasian Creed.  Belcher states that these creeds give Christians the ability to celebrate their commonalities without being caught up in non-distinctives and non-essentials.  According to Belcher, there has to be some sort of foundation that is not just preached but also practiced by those who call themselves Christians.

The remainder of Deep Church deals with divisive issues that have caused major rifts between those in the Emerging Church camp and the Traditional Church.  Belcher then presents the way that his community of faith--the Deep Church philosophy of Redeemer Presbyterian--deals with each issue in order to form the "Third Way" he believes to be essential for the peace, unity and purity of the Church. Belcher takes on Truth, Evangelism, the Gospel, Worship, Preaching, Ecclesiology and Culture, followed with a "how-to" chapter for those who feel led to move beyond the dichotomy of Emerging/Traditional toward a "more excellent way," to coin a phrase from the Apostle Paul.

I affirm Belcher's assessment that some new way of being and doing church is needed.  I also affirm his notion that there needs to be a place for those who find themselves betwixt and between when it comes to the arguments over orthodoxy in Christian theology.  I was encouraged by the stories Belcher tells about the life of his faith community, and the ways that they are striving together to be authentic and real with their faith.  It's easy to see that God is doing wonderful things through both Belcher and Redeemer Church to be the hands and feet of Jesus to the world.

I have to say, however, that I am unconvinced that Belcher has that much in common with the Emerging Church.  It seems to me that Deep Church does more to solidify his position as a traditionalist than it does to present some sort of alternative definition for "emerging" leaders in "existing" traditional churches.  His critiques of emerging church leaders are much more well-formed and assertive than any of his critiques of traditionalists.  As I read between the lines, I got a glimpse of a pastor who is just a tad left of center within his own context (a fairly rigid and legalistic context to be sure), who wants to have his cake and eat it, too.  He wants to maintain his traditional values, traditional worship, traditional thoughts on truth and Biblical authority, traditional views on preaching, the Gospel and culture... but still wants to be thought of as relevant, somewhat of a rebel and slightly edgy and theologically "sexy." But what might be edgy and sexy in the PCA denomination seems a whole lot less so in other contexts, like my own.

Overall, I think that Deep Church is an interesting read and an excellent primer on the discussion (or battle, if you prefer) between the Emerging and the Traditional churches.  I also believe that it does have something to add to this discussion.  But I do not believe that Deep Church does a convincing job of presenting what might be a true "third way" of understanding what it means to be the Body of Christ.
Christian theology Deep Church emergent church emergent conversation emergent theology Jim Belcher Traditional Church