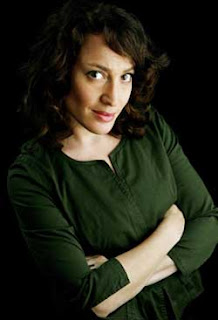 Righteous: Dispatches from the Evangelical Youth Movement by Lauren Sandler

First, let me just get this out of the way.  I decided to use the above photo of author Lauren Sandler instead of the cover of her book for two reasons:  1) It's just so dang smarmy and 2) It's just do dang smarmy.

If--and this is a big if--I ever get published I really don't want to have a publicity photo where I look like I am coming on to the reader.  Just saying.

The good news is, however, that (Sandler's photo notwithstanding) the book Righteous is an awesome read.  True, it's four years old.  True, it's covering some ground that has been tread and re-tread by many an author since.  But I have to say that when I read this book four years ago, I had no idea how prophetic it was.

Righteous is the culmination of a journey that Sandler took after the 2004 elections, when George W. Bush was elected for a second term, in large part by what the media dubbed, "The Religious Right" or the "Evangelical Right."   Sandler began exploring what the Evangelical Christian movement was doing to motivate huge numbers of people toward a common cause--like voting for a presidential candidate.  She wondered what sort of impact the Evangelical movement might have on America in the future, and decided to start with the people who would be assuming leadership in the next fifteen to twenty years: Evangelical Christian teens and young adults.

Righteous is the kind of book that I would recommend to church leaders, youth workers, and pastors.  It's a must-read, as far as I am concerned.  As a non-Christian, Sandler provides a fairly objective lens through which those of us who call ourselves Christians can see how we are perceived by those outside our little club.  She uncovers the not-so-hidden misogyny that permeates conservative Christianity (more explicitly expressed by Mark Driscoll of Mars Hill Church), the not-so-blurry lines between faith and politics that cause so many Evangelical Christians to confuse patriotism with faithful discipleship.  She also uncovers the pain that results when lines are drawn between "believers" and "non-believers," the "ins" and the "outs."

But Sandler also lifts up missions and ministries that strive to be authentically Jesus-like.  Even though she disagrees with the particularity of the Christian faith, especially as expressed in Evangelical terms, Sandler is quick to admit that there is something appealing about believing in something greater than oneself, being part of a community, a family and dedicated to a cause.  She even admits that at one point in the midst of a worship service she felt the desire to offer her life to Jesus and join the group.  Sadly, it was her "life experience" and "maturity" that kept her from taking the plunge.

I highly recommend this book, which you can purchase at Amazon through the link on my site.  You won't regret it.
book review Christian living lauren sandler mark driscoll Righteous