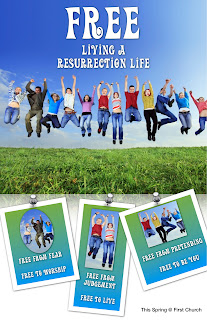 Today when I was in the checkout line at Publix, the cashier asked me, "How are you today?"

I paused before I answered.  I thought about telling her the truth:

"My day pretty much stinks, to be honest.  I've had a horrible week dealing with some pretty rotten stuff.  I'm stressed, tired, weary, beat, worn-out, picked on, picked apart and wishing desperately that I could take a long, permanent vacation to somewhere, anywhere but here."

I wonder what would have happened if I had actually told her the truth...  I bet she would have been frightened. I doubt that she really wanted to know how I was doing.  And I didn't really want to share.

It was easier just to put on a front and be a guy who is doing "good."

I wonder if she believed me.

I've been thinking a lot this week about how so many people find it easier to just to put on a mask and be someone they are not rather than be authentic and real.

I do my best to be the same on the inside as I am on the outside, but I am often not as honest with myself as I should be.  But I can sure spot a lack of authenticity in other people--I've got no problems with that at all.


Jesus was right (of course) when he told one of his cryptic stories about self-awareness to his disciples.  "You walk around finding specks of dust in other people's eyes," he said. "And you can't even see the huge chunk of wood in your own."

I go to an early morning spin class twice a week.  There is a woman in my spin class that makes the class a lot harder for the rest of us because she's pretending to work hard, but does a horrible acting job.  Here's the deal... If you don't have enough gear engaged on your stationary bike, it's too easy to pedal.  If it's too easy to pedal, you bounce up and down in your seat.  When the instructor is challenging the class to engage more gear and pedal faster, this lady bounces like a rubber ball.  Consequently, the instructor assumes that everyone is taking it easy and yells at us to add more gear.  Meanwhile everyone is giving the bouncing woman the hairy eyeball as she doubles her speed like she's Lance Armstrong on a straight-away.

We all KNOW she's faking it.  We know this because each and every one of us is dying in our seats, legs burning, breath gone...

I get angrier and angrier at the bouncing woman with every passing moment.  "How dare she?" I ask myself.  "How dare she violate the sanctity of spin class team etiquette?"

And I bet she doesn't even think we know.

How is that we think that no one can see our masks?

One of the age-old reasons why people leave church and never return, or why some people never want to be associated with church, Christians or Christianity is because the church is full of hypocrites.

Ironically, the Greek word that is the root for the word "hypocrite" is the word the ancients used for "actor."  In ancient Greece actors wore masks to convey their emotions to the audience.  While most Christians would chafe at the concept of being a hypocrite, they would probably have to admit that they have put on masks more than once to hide their true feelings.

I was reading this passage of Scripture in the New Testament that was written by the Apostle Peter.  He urged the 1st Century Christians to be the same on the inside as they were on the outside, to be good citizens, good family members, good co-workers...  He urged them to be authentic followers of Christ wherever they were so that people would be both convicted by their negative thoughts about Christians and Christianity and compelled to draw closer to see what made them different.

I wonder what it would look like if Christians just took off their masks and lived in the world as authentic people---broken, messed up, frail, falling short and full of grace and peace.