The Map: A Manly Man's Guide to Manly Faith 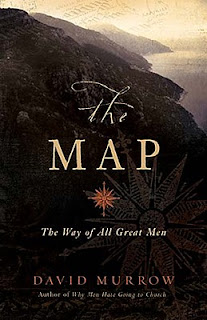 The Map: The Way of All Great Men by David Murrow

I have to admit, I read David Murrow's new book The Map: The Way of All Great Men with some measure of skepticism.  Murrow, the author of Why Men Hate Going To Church has fanned the flames lit by misogynistic Christian leaders like Mark Driscoll of Mars Hill Church in Seattle--perhaps even inspiring them to new levels of chauvinism and selective Biblical interpretation.  Murrow (and Driscoll's) basic premise about Christianity is that it has been feminized and stripped of it's appeal by the average "dude."  In The Map Murrow fleshes this notion out a bit more and suggests that there is a Biblical guide for men--a code, if you will--in Matthew's Gospel that gives them a path to greatness (hence the "way of all great men" subtitle).  Murrow asserts that Jesus went through three journeys in his life:  A Journey of Submission, A Journey of Strength and a Journey of Sacrifice.  If, he posits, a man follows in Christ's footsteps through these journeys (which begin "feminine" move to "masculine" and then end at "feminine") that he will find his true self, and the true point of Christianity for men.  He vehemently denies any misogynistic intent, but rather calls out to men to most certainly get in touch with their feminine, softer side when it comes to their faith without dwelling there.  I found the book a surprisingly informative and thought-provoking read, despite Murrow's insistence on using a Raiders Of The Lost Ark-type fiction preamble (that lasts for the first 100 pages) as a way to engage the reader.
David Murrow mark driscoll Mars Hill Church Men The Map Why Men Hate Going To Church