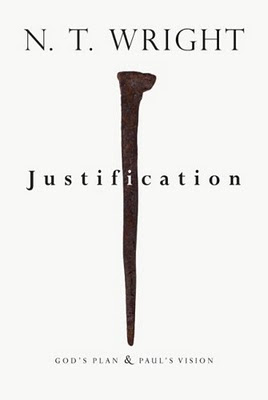 I was watching an interview with Bishop N.T. Wright recently when he was asked about the "big" issues in his writing and teaching--issues like resurrection, salvation and justification.  The question was essentially, "What about these big issues can you simplify for us lay people who struggle to understand them?"  Interestingly, Bishop Wright chose to focus on justification, particularly on the way in which it cannot be understood in Paul's writings apart from it's context.  Evangelical, conservative author and pastor John Piper had just written a book which was directed as a refutation of Wright's Pauline scholarship, particularly as it related to the 1st century Jewish context within which Paul was writing.  Piper actually warned his readers in his book not to get "misled" by the historical and textual criticism used by Wright to lift up how 1st century Judaism both formed and informed sound Biblical interpretation.  Piper told his readers to focus on the Bible.  Wright was actually incredulous that Piper would have issued such a warning, and wryly suggested that focusing on the Bible was what was sorely needed in the first place.

Not long after that interview, Bishop Wright released Justification, what he calls a "little" book that is really just part of a larger work that he hints he is working on even now.  Justification is essentially a response to Piper and other critics of the "new perspective" on Paul.  The "new perspective" as best I understand is simply a perspective of Paul that assumes  there is something at work in the context of the text itself that has to do with 1st century Judaism, Christianity, Jesus and a whole host of things that should not be glossed over en route to some more easily packaged "gospel."  The "new perspective" also assumes that there is a larger narrative at work in Paul's letters--a narrative that has it's origins deep within Hebrew Scripture and Jewish traditions and beliefs.  It is this new perspective (what Piper finds "distracting") that drives Wright's work on the "big" doctrinal issue of Justification.

Justification--according to Wright--is simple to understand despite centuries of misinformation and mismanagement of the topic.  Justification has become in most Christian circles, Wright asserts, a concept that stands in for all of salvation.  In this simplistic popular form, Justification works like this:   Human beings are sinful and unworthy in the sight of a holy God.  They need to be made righteous.  Nothing they could possibly do could obtain that righteous status, so God sent Jesus Christ to die in order to "become" righteousness for human beings.  Only when they have righteousness "imputed" to them because of their faith in Jesus can they be seen as upright and holy in the eyes of God.  Wright believes that the folly in this understanding of Justification lies in its focus.  Rather than focusing on God, this simpler and more easily digested form of Justification focuses on individual human beings, their faith and their imputed righteousness.  He likens it to describing a car by only using the term "steering wheel."  One wouldn't take their "wheel" out for a drive.  In the same way, salvation can't be summed up in Justification.  It is a part of it, to be sure, but not the whole.

For Wright the concept of Justification in Paul's letters is couched in covenant language.  To be justified doesn't have anything to do with imputed righteousness to an individual, but rather has everything to do with God's single plan of salvation through Israel for the world.  Wright asserts that Paul's belief was that God had something incredible in mind all along to redeem all of Creation, and that plan was unwavering throughout the centuries, beginning with Abraham and culminating with Jesus.  This covenant plan is proclaimed in the present by the faith of those who believe, and assured in the future when the verdict of God will match what has been affirmed.  In other words, we can know beyond a shadow of a doubt that there will come a day when--in the words of that great hymn--"Our faith shall be sight."  We will know then what we believe now.  Not only does Wright believe that Justification is covenantal (part of God's plan to save all the world) and eschatological (grounded in the present with an eye to the future) it is also Spirit-filled.  Through the power of the Holy Spirit of God, the believer who has been/is being justified can live into the hope of that promise and in accordance with God's plan and in the footsteps of Christ.

I would recommend this book for serious scholars of Scripture.  It is not for the faint of heart, or for someone who is just getting their feet wet in theological discourse.  For more accessible books by Wright I would recommend: After You Believe and Following Jesus.  If you are serious about Biblical studies, however, Justification is definitely worth it.
Apostle Paul Biblical studies Christian theology emergent theology John Piper Justification N.T. Wright New Testament salvation