A New Kind of Brian McLaren 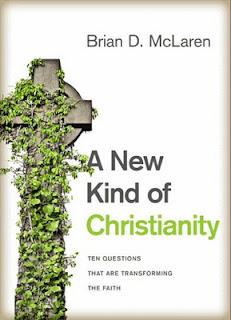 A New Kind of Christianity: Ten Questions That Are Transforming Our Faith
by Brian McLaren (HarperOne, 2010).
Brian McLaren has been under fire these past few years.  He's been called a heretic (one of the more kindly monickers), and been likened to the anti-Christ and/or Satan.  In his "friendly" note to his critics, McLaren offers this bit of advice to those who have attacked him for his ideas and thoughts on Christianity and the people who call themselves Christians.  "I repeatedly tell people, if they are happy and confident in your approach, that they stay with it and ignore me, my work, and my friends entirely. I am not here to steal any of your "market share" or do you harm in any way."
Sadly, the vitriol and the hate speech that is leveled at McLaren almost exclusively comes from "Christians" and "Christian" leaders.  Having grown up in a fundamentalist Baptist culture, I am familiar with the fear-mongering that takes place among otherwise decent and upright people, who simply can't stand the sort of theological questions that would displace one of the many cards in the flimsy house of faith they have built.  They seem to forget that it was "Doubting" Thomas who actually got to touch the resurrected Jesus and have his faith made tangible.  Questions are necessary and right and proper for those of us who stumble after Jesus Christ, and for those of us who haven't yet started stumbling.  And it is to questions--ten of them to be exact-- that McLaren turns is attention to in his newest (and I would argue, best and boldest) book.
As I began to read Brian McLaren's new book A New Kind of Christianity, I was struck by this quote that really (in my opinion) set the tone for what was to follow.  McLaren writes,

"Paradigms and dogma can be defended and enforced with guns and prisons, bullets and bonfires, threats and humiliations, fatwas and excommunications.  But paradigms and dogma remain profoundly vulnerable when anomalies are present.  They can be undone by something as simple as a question..." (16)

McLaren asserts that the "Church" needs to embark on a quest for a new kind of Christianity.  There are some who would see this as a betrayal, he notes, but he calls it "the most faithful kind of betrayal: a betrayal of the actualities of the past and present to seize the future possibilities toward which they reached." (18)  The ten questions that mark the quest toward a new kind of Christianity are as follows:

What is special about A New Kind of Christianity is the way that McLaren refuses to espouse either a progressive or conservative viewpoint on any of the aforementioned questions.  Instead, he borrows the "best" from both perspectives and charts a new way forward that is a both/and as well as a neither/nor.  This is refreshing in a culture where we are only presented with dichotomies when it comes to important issues, and especially important issues of faith.  McLaren also shows the folly of modern thinking and modern approaches to theology in what is quite possibly a post-postmodern age.  McLaren quite rightly states that there are so many people doing violence to the gospel of Jesus Christ under the name of Christianity, that it is time to change the paradigm completely, and to do so in a way that honors Christian tradition without idolizing it.

I have to say that this is quite possibly, along with Phyllis Tickle's The Great Emergence, one of the most accessible of the emergent theological works of the past few years.  I would recommend it to Christians and non-Christians alike.  If we are going to find our way through the impasse that has been created by reticent and angry people of faith from all walks and all persuasions, this should be required reading before we take a single step forward.
A New Kind of Christianity book review Brian McLaren emergent theology emerging Christianity