Good to Great to Gone 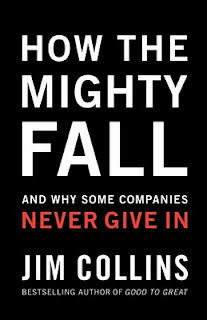 How The Mighty Fall: And Why Some Companies Never Give In by Jim Collins (Harper Collins, 2010)

When Jim Collins wrote his books "Built to Last"and "Good to Great" some years ago, he had no idea that some of the companies that he would be profiling as bastions of corporate success and longevity would be gone or nearly gone just a few short years later.  No one--or hardly anyone--foresaw the bloodletting that would take place in the global economy throughout 2008-2009--a bloodletting that resulted in the demise of more than one corporate giant.

Collins latest book, "How The Mighty Fall: And Why Some Companies Never Give In" begins by surveying the destruction of the Great Recession, and taking stock of the many companies that were "built to last," but didn't.  What Collins discovered, as he and his team culled through the names of once-great companies in recent history that have gone the way of the dodo, was that many of the "mighty" companies that have now fallen all have something in common.  In fact, each company went through five stages or death:

1.  Hubris Born of Success - this is the kind of pride that makes companies like Zenith or General Motors believe that their customers will continue to buy from them because of who they are and not because of what they can offer.

2. Undisciplined Pursuit of More - the recent mortgage meltdown is an example of this kind of undisciplined pursuit of quick profits with no thought of the consequence.  Circuit City--once the largest electronics retailer in the U.S.--got into the car business, and forsook it's foundation.

3.  Denial of Risk and Peril - this is when the leaders of the company are typically presented with facts that indicate things are not going well, and they ignore them or put a positive spin on them in order to allay the fears of the stakeholders.

4.  Grasping for Salvation - companies in this stage will often go through rapid leadership change, or will begin to charge off into unprofitable directions just to be innovative or stave off death.

5.  Capitulation to Irrelevance or Death - this sort of speaks for itself.

According to Collins, each of these stages is part of the journey that great organizations could tread if they give up doing what made them great in the first place.  And what makes "great" organizations great, you might ask?  Well, Collins offers up a short primer from his book "Good to Great" to help the reader see.  In a nutshell:  great" companies have disciplined people, thought, action and are built to last.

How The Mighty Fall is a great read, engaging and fascinating.  It's also a bit of a morality tale, if you will.  Within the stories and the statistics that Collins offers here are guidelines, warnings, signposts and unbelievably helpful advice for any organizational leader.
book review Built to Last economic recovery economics Good to Great Great Recession How the Might Fall Jim Collins