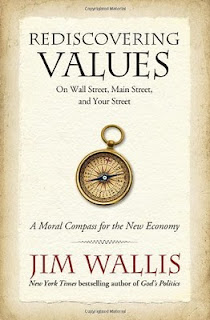 Rediscovering Values On Wall Street, Main Street, and Your Street:  A Moral Compass for the New Economy, by Jim Wallis, Howard Books.

Jim Wallis has never been one to shy away from tough topics.  In God's Politics he stepped all over the toes of politicos from the right and the left on his way toward higher ground in the American political conversation.  In The Great Awakening he called out the religious, political and commercial special interest groups that have long had a stranglehold on the way we think and talk about faith and politics as he envisioned a new way forward in a "post-religious" America.

Wallis intentionally peppers his work with Biblical imagery and language that would have been at home on the lips of Old Testament prophets, especially when he is pointing out the ways in which God has been mocked by our greed and replaced by false gods like the Market.  "The market," Wallis writes, "has become our 'golden calf' our idol of ultimate allegiance." (28) He goes on to say that "Today instead of statues, we have hedge funds, mortgage-backed securities, 401(k)s, and mutual funds." (29)  This allegiance to the god of the market was so total and so complete that we began, according to Wallis, to give the market godlike qualities.  It became "all-knowing, all-present, all-powerful, even eternal--unable to be resisted or even questioned."  He goes on to relate the story of the Great Recession:  the downfall of the mighty, the waste of cities, the betrayal and the disillusionment of a people.

Wallis fills what could have been a very somber read into one that is filled with signs of life and visions of hope.  He concludes that in the end, if we all assume responsibility for the change that must occur in our spending, in our wasteful habits, in our consumption of resources that the tide can turn, that there can be redemption.  God spoke to his people quite plainly through the prophet Malachi, "return to me and I will return to you."  It is easy to hear those words echoed all throughout Rediscovering Values.  It is a great read, thoroughly engaging and what America needs to hear now more than ever.