What The Dog Saw - Book Review 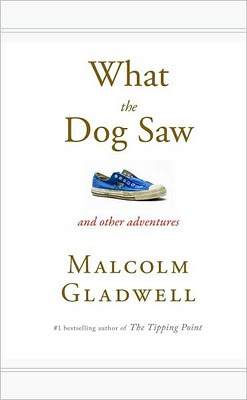 I recently completed Malcolm Gladwell's newest book What The Dog Saw: And Other Adventures. Gladwell is the wildly successful author of The Tipping Point, Blink and Outliers.  What The Dog Saw is a collection of essays that Gladwell completed for The New Yorker over the last decade or so.  Gladwell's success in the world of nonfiction has been largely attributed to his ability to tell a story, but I believe that his boundless curiosity about the world and how it works is his most endearing quality.  For example, The Tipping Point asked the basic question, "How do movements, trends and cultural phenomenon begin and grow?"  Blink asked, "How do people make decisions...really?"  Outliers asked "What makes successful people, successful?"  What The Dog Saw is simply a series of the same kind of great stories and questions that make Gladwell's work so engaging.

Gladwell wonders in The Pitchman what makes Ron Popeil, the CEO of Ronco and the TV pitchman of his invention, the Ronco Showtime Rotisserie and BBQ, such an incredible salesman.  He delves into the reasons why gourmet ketchup doesn't sell like gourmet mustard in The Ketchup Conundrum.  He even finds a way to connect feminism, hair color ads and cultural transformation through marketing in True Colors.  The title essay, What the Dog Saw is an essay that Gladwell wrote about Cesar Milan, the popular host of the TV show "The Dog Whisperer."  While there are plenty of essays that deal with some puzzling cultural questions, the bulk of Gladwell's work in What The Dog Saw touches on the troubling subjects of our time: economic disaster, war and terrorism.

On a personal note, I couldn't put this book down.  It's one of those books that as you read it, you can't help but go into the bedroom where your spouse is and regale them with all of the new-found knowledge that Gladwell threw your way.  I actually felt smaller after I read it.  That's how much I liked it.  Bottom line:  get this book, go do it now.  You won't regret it.
Blink book review Malcolm Gladwell Outliers Tipping Point What the Dog Saw