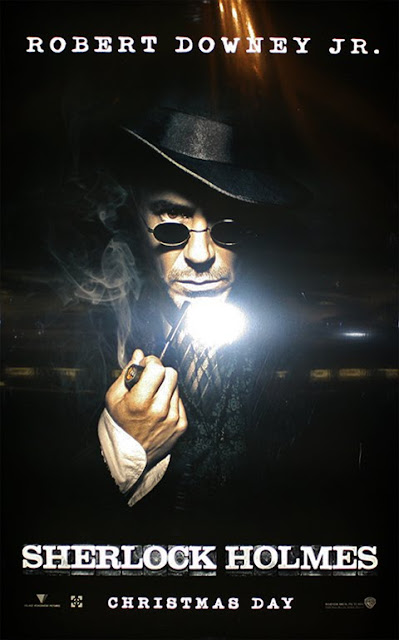 Sherlock Holmes is probably one of the most recognizable and marketable literary characters of all time.  The great detective was originally conceived by Sir Arthur Conan Doyle in the 19th century and since then has been portrayed in TV, film, radio, comic books and of course in popular literature for over a century.  The most famous portrayal of Holmes came from Basil Rathbone who portrayed the detective from 1939 to 1946 in a series of films that held closely to the original stories set in Victorian London.  In his wildest dreams Rathbone could never have imagined Sherlock Holmes and the action-packed, computer graphic-laden, thriller that director Guy Ritchie brought to life.  Rathbone also could have never imagined the interpretation of Holmes that Robert Downey, Jr delivers.

Unlike the perpetually calm, resolute and always-in-control Holmes of yore, Downey, Jr’s Holmes is a manic, self-destructive artist, who constantly needs an impossible challenge in order to maintain his own sanity.  Even so, there is something incredibly charming about Downey’s portrayal.  Drawing from obscure references from the original stories, Downey’s Holmes demonstrates his penchant for bare knuckle fighting, breaking and entering, and an uncanny ability to almost instantly assess a situation.  In this film, 221B Baker Street--the famous residence of Holmes--is not a bastion of piece and order.  Downey’s Holmes holes himself up in his quarters, trashing it like a rock star out of boredom and depression while he waits impatiently for something, anything to happen.  When the evil Lord Blackwood (who is caught by Holmes and Watson in the opening scenes of the movie) seemingly returns from the dead after being executed, Holmes gets the adventure that he craves.  The only woman to ever reach Holmes heart, Irene Adler (played ably, by a game Rachel McAdams), plays a game of cat and mouse with Holmes--working simultaneously with him and against him in an out of reach way that seems to delight the great detective.  In Downey, Holmes most petulant and childish moments come when his relationship with Dr. Watson is threatened by Watson’s impending marriage.  Jude Law’s portrayal of the perpetually longsuffering Dr. Watson can best be described as muted.  Law’s Watson allows for very little of the incredible intensity that Law has previously brought to the screen in films like The Talented Mr. Ripley and Midnight In The Garden of Good & Evil.  He is, in the end, the perfect Robin to Holmes’s Batman.  And in this case, the comic book reference works completely.  Director Guy Ritchie offers up a non-stop, thrill ride set in an unbelievably accurate and stunning computer-generated London.

For anyone reading this who would like the movie assessed for family viewing... It would be a stretch to say that Sherlock Holmes is a family film.  I made the decision to leave my 5-year old at home when we went to see it.  However, the PG-13 rating comes primarily from the action and the violence in the film as well as some graphic scenes of decayed bodies.  If you like imaginative fight scenes, you will love Sherlock Holmes.  There are more than a few of them for your viewing enjoyment!  There is very little foul language, no nudity, and no suggestive scenes.  There are lots of spiritual lessons to be learned from the film:  the importance of teamwork, the need for purpose in life, the triumph of good over evil, the perils of being seduced by power... just to name a few.  I give it three and a half stars out of five.  Enjoy!
guy ritchie jude law movie review rachel mcadams robert downey sherlock holmes