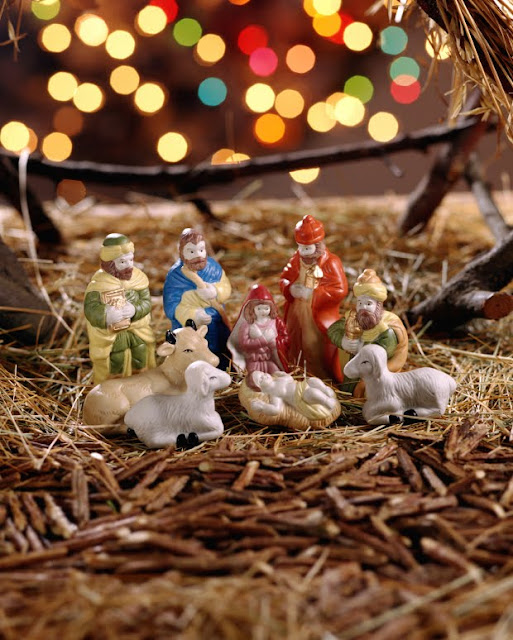 It's nearly Christmas Eve.  I have been doing my best to cram two sermon preps into one afternoon, but I am losing that battle.

I've been thinking a great deal about what I will say tomorrow night.  My wife tells me that it should be a good sermon because there are so many visitors who will be there for the first time.

Several years ago when I was in seminary I took a Preaching class.  It wasn't a bad class as seminary Preaching classes go, but they did force us to read our sermons from a manuscript.  I told the professor then that I was not, nor would ever be the kind of preacher who read a sermon.  I thought that reading a sermon did violence to the art of sermonizing.  I argued that we weren't delivering an academic paper (he disagreed) and then I went on to equate listening to preachers read their sermons with other exciting things like watching paint dry or grass grow.  When I was finished, he sort of looked at me in that condescending way that seminary professors look at you when you make broad, sweeping statements about what you will do once you get out of seminary, and told me that if I wanted a decent grade in his class that I would comply with his wishes.

So that was the first and last time I ever read my sermons.

He was a good teacher, though, despite his insistence on treating the event of the sermon like a segment on NPR.  What he lacked in style, he made up for in substance.

I remember one day we were discussing the proper way to conduct a Christmas Eve service (solemnly and with much pomp and circumstance) and the suggested length of the Christmas Eve sermon (short) when several of us had the same question all at once.

"Don't you ever get bored of preaching the same thing every Christmas Eve?  What do you do to make it more interesting? Do you have to preach from Luke chapter 2 every year?"

My professor took off his glasses and set his book down.  We sat on the edge of our seats awaiting something profound.  I wanted him to expound on the virtues of preaching from Titus, or how a Psalm could be just as meaningful as Luke's Gospel.  I wanted him to release us from the bondage of tradition and give us wings so that we could glide away on the winds of change.

I have never forgotten that.  And so every year at this time, I just tell the story...

I am fully aware of the fact that when I tell this story again this year that I will be doing so in the context of a fairly affluent, oldline Protestant church full of mostly white people holding candles.  The Christmas Eve service will be something that we all do either on our way to or from something else.  We'll be full of good cheer.  Simply full of it.

The story of how God saved the world isn't nearly as romantic as we would like to imagine it from the safety and cheer of our Christmas Eve pews.  Consider this...

Despite the way that historians and theologians struggle over the where's and when's of Jesus' birth, it seems pretty clear that Joseph and his very pregnant wife Mary were tired, poor and homeless when they arrived in Bethlehem.  Although it was the land of his ancestors, Joseph seems to be without prospects and certainly without the kind of money it would take to find a decent place for his wife to deliver her baby.

They make a great pair...

Mary was a teenage girl who was almost certainly the object of an arranged marriage.  She was barely out of her childhood, pregnant and completely beholden to Joseph, who could have had her killed when she announced her pregnancy.  She disgraced her family, and would have been looked down upon in her community.

Joseph was undoubtedly derided and defamed for choosing to wed Mary, who had become mysteriously pregnant during their engagement.  His decision to forgive her when she had obviously cheated on him was probably one that raised more than a few eyebrows in their hometown, and may have contributed to their leaving in the first place.

They were at the whim of the State.  They had nothing.  They were nothing.

Archaeologists uncovered an ancient monument commemorating the birth of Caesar August.  It referred to him as "The Lord" and the inscription hailed the "birthdate of our god has signaled the beginning of good news for the world."

Funny.  The "good news" that Caesar brought wasn't seen as "good news" for the people on the margins.  People like Mary and Joseph...  Or like the shepherds in Luke chapter 2.

Shepherds were thought by most people to be shiftless, lazy and more importantly unclean and not fit to be part of decent society.  Their constant close proximity to the sheep they cared for prohibited them from taking part in religious celebrations and from even being in contact with other people.  It is widely believed that the shepherds in Luke 2 were watching over sheep that would have been used in the very temple sacrifices and ceremonies they were prohibited from keeping.  Ironic.

When the angel appears to deliver the "good news" of the birth of the Prince of Peace (another name often given to Caesar Augustus) the message is given to outcasts.  The songs that are sung by the heavenly hosts are not sung in the courts of the proud and powerful, but on the hillsides on the outskirts of the city.

And the song that they sing is one of the doxa of God---a translation of the Hebrew word for God's glory, kabod, which essentially means "the heaviness of God."  The angels sing to these outcasts that the very presence of God is heavy upon the world.  And things are going to be different.

This is the story of good news for all people... not just a few people.