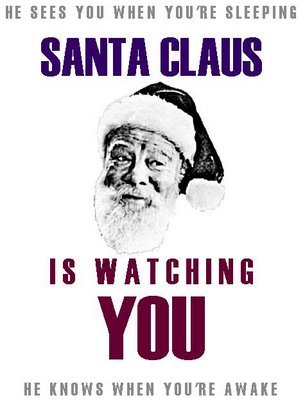 What motivates your faith?

Fear? Desire to be a better person? Tradition?  Ritual?

I was thinking a lot about that this week as I am preparing for my last sermon of this season of Advent, and given the time of year my thoughts wandered a bit to Christmas-y memories.

When I was a kid my faith in Santa Claus was founded on one thing and one thing only.  If I wasn't a good boy, he wasn't giving me jack for Christmas.  There are songs about this belief.  Hymns, to it, if you will.


Does anyone else find this creepy, but me?  And the song got worse, right?


You know, it doesn't really matter how we try to sugar coat this whole Christmas/Santa Claus thing---in the end it all comes down to trying to get more stuff.  Think about it.  We teach kids that if they are on Santa's "good" list, they will get presents.  If they are on the "bad" list, they don't.  Their behavior then determines whether they receive more crap or not.

This is how pervasive and long-lasting this strange faith is:  When I was growing up, the "bad" kids were always promised a lump of coal in their stocking.  I am getting older, but even when I was a kid people had pretty much stopped using coal to heat their homes or cook food.  We actually had electricity for those kinds of things.  Still, we were promised coal if we were bad.  I said the same thing to my kid not too long ago.  He doesn't even know what coal is.

We are taught that we are supposed to shape up before Christmas.  And here's something even more bizarre.  Whatever sins that we have been guilty of leading up to December 25th can be absolved if we muster up enough goodness to limp to the finish line.

So we can get some presents.

And so many people think this is cute and wonderful and we've passed this faith on down through the years, and I find myself saying the same damn thing to my own five year-old when he begins to act like a turd this time of year.

This cute and cuddly belief in the magic of Christmas and the coming of St. Nick is in reality completely shrouded in fear, coercion, control, guilt, shame...  Not to mention, materialism, consumerism, selfishness and individualism.

If I sound like the Grinch Who Denigrated Christmas, sue me.  It is what it is.

Imagine with me for a moment.

Imagine that we started saying to people, "Jesus is coming!  The Messiah is near!  Christmas is about to happen!  Repent! Make your heart right with God!  Start living like you were meant to live!  Spend less! Love All! Worship Fully!"

They would think we were lunatics.  They would assume that we were religious fanatics.

But if warnings of right behavior, repentance and preparation are followed by cheery reminders of the coming of Santa Claus and spending money at the mall...Well, now that's a different story.

I am preaching from Luke chapter 3 this week.  It's Luke's version of John the Baptist's sermons in the wilderness.


7John said to the crowds coming out to be baptized by him, "You brood of vipers! Who warned you to flee from the coming wrath? 8Produce fruit in keeping with repentance. And do not begin to say to yourselves, 'We have Abraham as our father.' For I tell you that out of these stones God can raise up children for Abraham. 9The axe is already at the root of the trees, and every tree that does not produce good fruit will be cut down and thrown into the fire." 10"What should we do then?" the crowd asked. 11John answered, "The man with two tunics should share with him who has none, and the one who has food should do the same." 12Tax collectors also came to be baptized. "Teacher," they asked, "what should we do?" 13"Don't collect any more than you are required to," he told them. 14Then some soldiers asked him, "And what should we do?"  He replied, "Don't extort money and don't accuse people falsely—be content with your pay." 15The people were waiting expectantly and were all wondering in their hearts if John might possibly be the Christ.[b] 16John answered them all, "I baptize you with[c] water. But one more powerful than I will come, the thongs of whose sandals I am not worthy to untie. He will baptize you with the Holy Spirit and with fire. 17His winnowing fork is in his hand to clear his threshing floor and to gather the wheat into his barn, but he will burn up the chaff with unquenchable fire." 18And with many other words John exhorted the people and preached the good news to them.

I'm particularly fond of the "brood of vipers" comment.  I looked up what that meant.  There was this viper--Nicander's viper, to be exact---that the ancients believed actually ate it's way out of it's mother's womb.  Nasty, man.

Imagine if the Salvation Army ringer outside the Wal-Mart warned everyone that was going inside that they were a bunch of matricidal snakes that needed to repent.

We've been singing the song "O Come, O Come Emmanuel" at my church for a few weeks now.  Emmanuel is a word that means "God With Us."  What does it mean that God is with us?  I mean what could it mean for us if we really and truly BELIEVED that God was really with us... That the Messiah was on his way and is already here?

That God is all around us, in us and through us...

Would we act better?

Would we watch out... and not pout...  and not cry... and stop living only for ourselves... and stop hating one another... and show some mercy... and act with justice...