"Thank You For Enslaving Us!"

Yes, I am still preaching about money.

And no, people haven't stopped coming to church.

Although after last week's sermon on tithing, I might lose a couple.

Listen, I saw the above bumper sticker in a restaurant on the bulletin board.  I went there to consume mass quantities of Italian food.  I ordered spaghetti and meatballs with extra meat balls.  The extra meat balls cost like a buck extra.  There were four of them--each the size of baseball.

I got my money's worth and took about twenty minutes off of my life, too boot. Woot!

Anyway, back to the bumper sticker.  What do you think o that? Isn't that messed up?

I mean, we just started climbing out of the worst recession since the Great Depression and the first thing on everyone's mind is... "Well, get back to spending!"

Okay, okay.  I get it.  It's Capitalism.  But isn't that the thinking that started this whole mess--the belief that the acquisition and consumption of wealth is the chief end of humankind?

I was having a conversation with someone who took umbrage with the fact that I would suggest that Joel Osteen's "theology" of prosperity was heretical, and ill-conceived.  I know.  When I put it like that it sounds so mean.  Anyway, she said--and I quote--"My husband and I use our wealth for the glory of God."  I know that she was earnest, and that she means well.  The bold was added by me for emphasis.  I have no idea if she would have emphasized them if she had spoken them to me, but there you go.  The things in bold gave me reason to pause for a moment and reflect.

I don't know about you, but whenever I have talked about my finances I have NEVER EVER USED THE WORD "WEALTH" TO DESCRIBE THEM.  Because I ain't wealthy is why. So right off the bat, she made me feel like poop.

Second, what do people mean when they say "for the glory of God?"

Does it mean, "I give this large check to the building fund of my church for the glory of God and the plaque that says I gave it?"

Or does it mean, "I know I didn't deserve any of the blessings I have been given, but I am grateful and I want my life to show it." And anyone with a lick of sense would say the second thing.  But it doesn't really matter what we say does it?  We usually live a different truth.

And our culture doesn't help us any on this one.  It's like the Recession made us realize that we were pretty much enslaved to greed, debt, consumerism and materialism, but we haven't made any real attempts to break free.  If we are really being honest with ourselves we have to admit that in many ways we welcome enslavement.  We embrace it.  We even "thank" the very entities that are enslaving us by buying more, consuming more, going deeper and deeper into debt and believing the lie that our culture perpetrates about money and stuff and success.

There is this cool, almost completely ignored passage of Scripture in Genesis 47.  This is the "rest of the story" of Joseph--you know, the coat of many colors guy from the musical.  Anyway, Joseph becomes probably the most important person in Egypt other than the Pharaoh.  There is a huge famine in the region and Egypt has food because Joseph planned for it.  So naturally people need food and so they come to Egypt to buy it.  When they run out of money they trade their livestock.  When they run out of livestock they turn over their property to Pharaoh.  So now Pharaoh is the biggest landowner in the known world all because of Joseph's shrewd business dealings.  The people have no money, livestock or land to trade for food, so Joseph does something very shrewd---he turns them into serfs, slaves, sharecroppers... whatever word you want to use.  They can live on the land that used to be theirs, but now belongs to Pharaoh, and 20% of everything they grow, produce, raise belongs to him.

And this is what they tell Joseph after all of this...


25 They said, "You've saved our lives! Master, we're grateful and glad to be slaves to Pharaoh."


I read some older commentaries on this passage that praised Joseph for his shrewd dealings.  These commentaries asserted that the acquisition of wealth, livestock, property and wealth from taxes was a sign of God's favor on Joseph and on Pharaoh for raising up Joseph to such a high state.  They also stated that a 20% tax rate was fairly low for that time period.  I suppose. But when you don't own anything and you are in hock up to your eyeballs--20% can be pretty awful.

Personally, I think this is a story about how sometimes even the things we do with the best intentions can have really cruddy outcomes if they are done on our culture's terms.  Joseph used the terms of his culture to acquire power, wealth and status.  He was a faithful God-follower, and a good man, but all of his good intentions became twisted.  Joseph essentially enslaved hundreds of thousands of people and granted unbelievable power to Egypt's throne.

You can see where this is going.

Pharaoh died.  So did Joseph.  And in less than a generation the Pharaoh that came next forgot all about Joseph and what he had done to secure such unbelievable wealth and power for the Egyptian throne.  And the Hebrew people were seen as a threat and were forced into complete slavery, and it was upon their backs that the great monuments to Egyptian power and glory were built.

In Hebrew literature Egypt is equated with Slavery.  So is Babylon, for that matter.  But Babylon is usually equated with Cultural and Religious Slavery whereas Egypt is more specifically equated with Economic Slavery.  So Joseph's good intentions were essentially twisted and warped to the extent that his people were subjected to 400 years of enslavement to the gods of Materialism, Greed, Wealth, Empire, Consumption...  I could go on, but I am sure you get the picture.

And in the beginning they thanked Joseph for enslaving them.  They thanked him.  And in so many ways they kept thanking their slave masters by buying into the system, supporting it, acquiescing to it and by making idols out of money and possessions and all they represented.  Until it was too late.

Does any of this sound familiar?

Jesus spoke about this kind of thing in Luke chapter 12.  It's one of his most famous sayings, and one that everyone sort of knows--even people who don't really know that much about the Bible.  He said, "Where your treasure is...there your heart will be also."  This famous saying is predicated by Jesus saying things like, "Don't lay up for yourselves treasures here on earth.  They won't last.  People will steal them.  They will become meaningless.  Instead lay up treasures in heaven. Focus on the kingdom of God and all your needs will be met."

In one of the ancient Jewish Mishnahs (teachings) it is said that when a child comes into the world her fists are closed because she believes that she must grasp as much as she can.  But when she is old she dies with her hands open wide because she has learned she can take nothing with her.

I am not trying to knock prosperity.  As Jim Wallis has said, "The Bible doesn't mind prosperity, it just insists that it be shared."  What I am knocking is the way our culture has taught us to view our money and our stuff--not only as a means to and end, but also as the end itself. 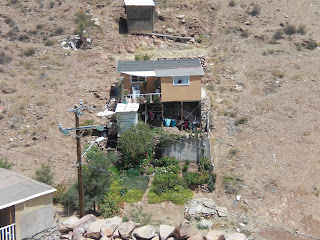 This was taken in Tijuana, Mexico on a mission trip that I used to lead. We were hiking up a mountain and we discovered this house in a very small neighborhood that was halfway up the mountain in the middle of nowhere.  All around this house is dust and drought.

But this person built something beautiful in the midst of that.  Something that doesn't make sense in the eyes of culture.