Blessed to Be Faithful 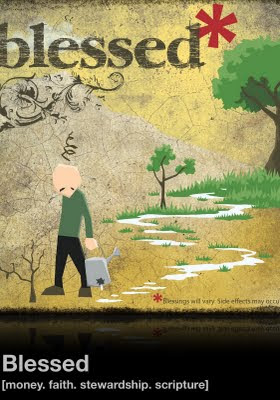 I am continuing my sermon series on Money this week.

And I will be preaching on tithing.

First, I need to say this. The word tithe comes from the word "tenth."  So when I talk about "tithing" I talk about the regular giving of one/tenth of one's income to God.

People don't like to hear sermons on tithing, I've learned. Because most of them don't... you know, tithe.

Some Christians (generally the ones who as I mentioned earlier don't tithe) like to say things like, "Well, Jesus didn't say anything about tithing!" or (if they are really pompous and learned) "Tithing is simply not part of the New Covenant."  That last bit is a Christianese way of saying the first thing.

There are some people who get all hoity-toity (untranslatable in any language) when pastors talk about tithing because they have this notion that all pastors care about is getting people to give money to their church or their ministry.

I read that most Christians give between 2 and 2.5% of their annual income to their church or to faith-based type stuff.  I'm not much of a mathematician, but that's not 10%.  I wonder why they don't tithe.  It's sort of a command from God, from what I hear.  Lots of Christians believe that gay people are going to hell, that women shouldn't preach to men, that Joel Osteen is profound... and they seem to be pretty passionate about those kinds of things.

But when it comes to tithing. Not so much.

"It's between me and God!" some irate Christian might say (or so I've heard).

Yep.  It is.  And that ought to scare the hell out of most people who call themselves Christians.

I get that churches and pastors haven't done the best job of engendering trust.  Watch Christian cable shows like TBN for about five minutes and you will feel your heart harden along with your IQ.

But sometimes the expectations that people place on their gifts to their church are pretty dang crazy.  There was this guy that I heard of from Dade County, FL (judgment on location of story withheld) who sued his local church for the $800 that he gave it.  He claimed that the pastor promised that he would receive an exponential return on his investment and he didn't.

Bummer.  'Cause that's why I give to the church, so I'll MAKE money.

There is this great passage of Scripture that unpacks this whole tithing ting so well.  It's from the book of Malachi in the Hebrew Scriptures.  The passage reads:


6 "I the LORD do not change. So you, O descendants of Jacob, are not destroyed. 7 Ever since the time of your forefathers you have turned away from my decrees and have not kept them. Return to me, and I will return to you," says the LORD Almighty.  "But you ask, 'How are we to return?' 8 "Will a man rob God? Yet you rob me.
"But you ask, 'How do we rob you?'
"In tithes and offerings. 9 You are under a curse—the whole nation of you—because you are robbing me. 10 Bring the whole tithe into the storehouse, that there may be food in my house. Test me in this," says the LORD Almighty, "and see if I will not throw open the floodgates of heaven and pour out so much blessing that you will not have room enough for it. 11 I will prevent pests from devouring your crops, and the vines in your fields will not cast their fruit," says the LORD Almighty. 12 "Then all the nations will call you blessed, for yours will be a delightful land," says the LORD Almighty.


I was thinking a bit about the context of this bit of prophetic preaching.  Things were not good for the Hebrew people.  The economy was devastated, jobs were lost, people were displaced and many were feeling homeless and helpless.  And in the midst of all of this there were people who became fearful of losing what they had so they started hanging on to it by any means necessary.

So here's a big and very hairy question:  "Why did God choose 'tithing' as the sin God wanted to focus on when it came to Israel's broken covenant?"  Why indeed.

Here's a thought:  "Motivating and accompanying all true gifts to God is the outpouring of our life, our love and our all."  I truly dig that.  This means that if my gifts to God are given under duress without any sense of relationship, trust, love and devotion... they are pretty much meaningless.  Is tithing connected to our relationship with God?  You bet your backside it is.

The fact of the matter was that Malachi was addressing some pretty basic stuff.  Orphans, widows and foreigners were not being taken care of properly, the poor were forgotten, justice was not being done, mercy was not present.  There was no acknowledgment on the part of the people that everything they possessed belonged to God.  There is a sense of incredulity that human beings would try to "rob" or withhold from God for the purpose of their own self interests.

Some of us would say, "Yeah! Damn right! Feckless ancient Israelites!"

Some of us would actually use the word "feckless."

But then the slow realization that we suck at this whole generosity thing should dawn on us.  And even more slowly we should begin to realize that we haven't a clue what it means to truly tithe of what we have--giving back to God what belongs to God.  And even further, to trust that God can do so much more with our ill gotten gains than we could ever hope to do on our own.

I watched my parents tithe my whole life.  I used to laugh at that kind of stuff.  "Who gives ten percent of their income to some damn church?" I would think when I got old enough to think.

My dad made like $7,500 a year at his first teaching job back in 1976.  That's not a lot of money even by Bicentennial standards, man.

And they tithed ten percent of that tiny amount of money.  And my parents never got rich, and they never had the kind of prosperity that seems to be promised by all of those idiotic televangelists.

We shopped at thrift stores for my school clothes, books and toys.  I had to put my birthday presents on layaway at Kmart and earn enough money to bail them out. We had enough, and nothing more.

And so I watched my parents tithe and I laughed about it, and thought to myself that I wouldn't get that dumb when I grew up.  Tithing was what fundamentalist Christians did in their little fundamentalist churches where women didn't wear pants and TV was called "that devil box."

When my wife and committed to tithing ten percent of our annual income we weren't sure what would happen.  There have been moments where we could have really used that ten percent to pay down some debt or get caught up on a few bills.  Or heck, to even save a little bit for a rainy day because it always ends up raining sooner or later, doesn't it?

But we have always had enough.  I'm not getting rich doing this.  I think that's kind of the point, don't you? Rick Warren, the pastor of Saddleback Church in CA could be like a gazillionaire with all of the Purpose Driven Life income that brother is raking in.  I found out he gives away nearly 90 percent of his income. He and his wife made a commitment that as their income increased, so would the percentage of their tithe.

I think God knows that would be too much for me.

I wish God would reconsider.

Something tells me that God won't.

I'm learning what it means to be faithful and generous with my stuff.

Imagine if we all were able to really master that.

I heard somewhere that if every Christian in America made a commitment to tithe 10 percent that  every church in America would meet their budgets, expand their ministries and meet their needs... And that the surplus would essentially be enough to take care of all of the basic health, education and sustenance needs of all the people in  a fairly large country in Africa for an entire year.

That would be something.

So God keeps saying to us... "Test me... I promise that if you figure this out, things will be different!  You'll discover that when you learn what it means to be faithful and generous that you and everyone around you will have enough...maybe more than enough."

I wonder how long it will take us to accept God's challenge?