- October 27, 2009
I went to the Holy Land Experience yesterday with my youngest son, who happens to be five going on forty.  It was my first visit to the Christian-based Orlando theme park since the Trinity Broadcasting Network bought it some years ago.  I went, quite frankly, because my wife and older son went on a 15 day trip that included several days in the real Holy Land, and I promised my little guy we would one-up them.  Our mission was not to merely experience the Holy Land Experience as a means of one-uppance. We knew that wouldn't cut it.  Our mode of one-uppance was going to come when we got our picture taken with Jesus, which we were certain we would be able to do. The brochures and television ads clearly showed Jesus walking around greeting people in the park.  We decided that a photo op with Jesus himself would pretty much trump any ancient ruins that the other two members of our family visited.  In a moment of kindness I will include you on my little photo safari through the land of near-ancient Israel where the Crouch's are king, T.D. Jakes is THE MAN and an aging Dino still gets to play piano and make the old bee-hive hair-doe'd Pentecostal ladies swoon---Liberace style.

The Holy Land Experience claims to be the one place in Orlando where you can literally go back in time and experience what it was like in ancient Israel.  I snapped the pic to the right at the entrance to the "Smile of a Child" area of the Holy Land Experience.  I am just spitballing here, but I am guessing that ancient Israel didn't have randomly placed trees filled with parrots and butterfly park benches guarded by grouchy Roman soldiers... or did they?

And this pic also begs the question, "Why place this rather imposing and scary resin statue at the entrance to the kids area?"  Is it a reminder that they should behave, refrain from naughty words and mind their teacher---who also happens to be their mom since they are homeschooled? 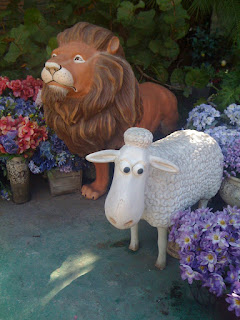 Take this one for example, which was also discovered in the kids zone of the park.  I know that the good folks at TBN had the right idea---you know, the whole lion lying down with the lamb thing.  But why utilize what looks like a serious, regal prop from a Narnia exhibit when it comes to the lion and then bust out with a sheep from the Wallace and Grommit movies (or Serta commercials, whichever your prefer) to stand opposite him?

And what does the sheep seem to be saying here with his sideways glance?  "I know that things are supposed to be different now that we're lying down with lions, but I still don't trust the bloody thing."

I guess that's the best way to describe much of what my kid and I experienced in the Holy Land Experience:  random. 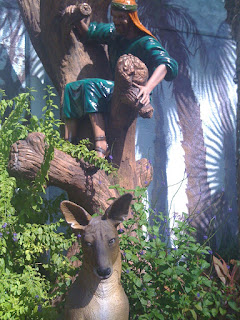 Take a look at this pic on the right.  I snapped it in the kids zone along with the others.  It's Zaccheus up a tree.  But inexplicably there is this kangaroo right below him.

First, kangaroos are not indigenous to Gaililee.  Anyone knows that.  Second, why place it randomly in the Zaccheus story?  Is there more to the Zaccheus story than we saw at first blush?  Could this be Vince the Kangaroo, who was cut from the first draft of the story we find in the Gospels?  Maybe Zaccheus climbed the tree because he had sold Vince a sub prime mortgage and Vince was going to open up a can of kangaroo style whoop ass on him in retaliation.

Does anyone else but me think this is messed up? 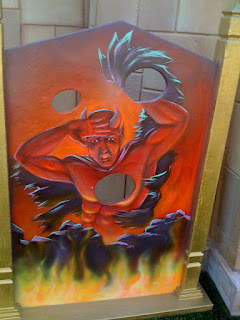 This was the bean bag toss in the bizarre castle-themed area of the kids zone.  Yes.  It's the Devil.  You get more points for throwing the been bag through the whole where his heart should have been.

I am seriously not making this stuff up.

The people at TBN have lots of money from all of those Carmen DVDs they sell on TV.  They should be able to afford something a little more interesting than this for kids to play with at their amusement park.

"Okay, Johnny, you've got three tries to make your beanbag go through the Devil's holes!  Miss more than once and you're damned to eternal retribution!  Ready, set, Go!" 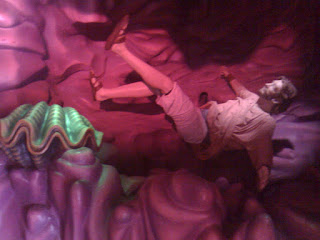 This is the Jonah in the belly of the whale exhibit.  There is a talking clam in the foreground.  You can't see it in the pic, but there is also a large octopus, a star fish and some sort of grouper.  All of them talk.  The octopus sounds like he was voiced by a white man trying to tell a Chris Rock joke and doing his best Chris Rock voice to do it.  Yeah, it was that racist.
At any rate, the little sea creatures are carrying on an endless dialogue about Jonah being in the belly of the whale.  Jonah occasionally will spout off Scripture in the King James version of the Bible in a cavernous, deep voice. 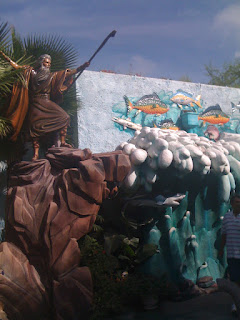 This is a straight-up Chuck Heston/Moses statue parting the Red Sea that is inhabited by happy little fish and dolphins.

You walk between the walls of water by the way.

At least my five year old thought it was.

Come on... it's Chuck Heston, for crying out loud. 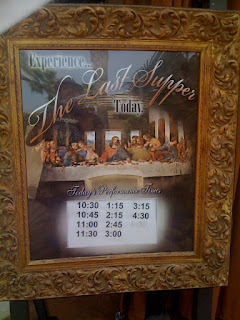 Communion is celebrated every 15 minutes at this spot.

Jesus shows up to talk you through it.

People would get their early so that they could get a good seat. 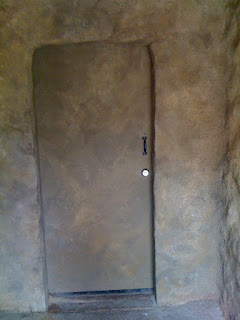 I found this door in the empty Garden Tomb.

It was next to the spot that the TBN people set up to look like where Jesus had been.

Theologically this door messes up a bunch of your belief system if you ponder it for a while.

I pointed it out to my kid, who is--as stated--five going on forty.  I said, "Look at that door in the back of Jesus' Tomb." he looks at it sort of nonplussed and says,  "That's where they store stuff." 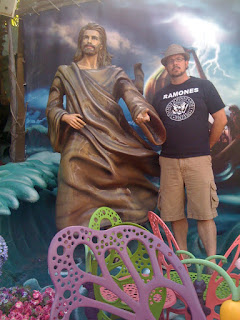 My five year old took this picture to the right using my iPhone.  I was proud of him.

This is a photo site that was set up by the TBN people so that you can have your picture taken next to Jesus to look like you are walking on water like Peter.

If I look like I am calm, it's just because I am fully at peace in the presence of the Resin Christ.

Oh don't hate me because you ain't me.  It was too good of a pun to pass up.

And yes, these damn butterfly benches were everywhere. 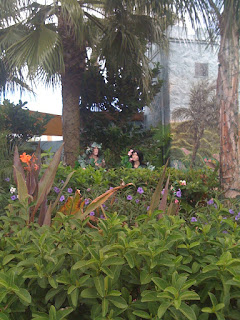 If you look really closely in the background of this photo you can see two mannequins that have branches and flowers in their hair like druids.

They are hiding back there, looking all stoic. 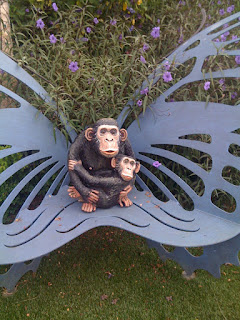 They look sort of cute, though.

Come to think of it there were lots of creepier things than these monkeys in the Holy Land Experience.  Like the maintenance guy who leered at us with blackened misshapen teeth when he told us directions to the restroom.  And then sort of followed us in there.

And the video of Benny Hinn playing in the bookstore. 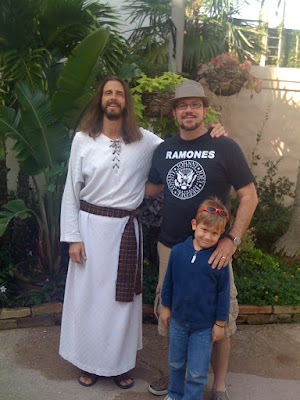 Okay, so the day wasn't a total loss.

We got our picture with Jesus.

And some kind people from Jamaica took it for us.

I couldn't help but overhear Jesus tell the man who took our picture that "if there were more people like you in America, it wouldn't be in the shape it is right now."

I bet it seemed weird for the Jamaican guy to hear that from Jesus.

Who cares.  Me and my kid got our picture taken with the man himself.