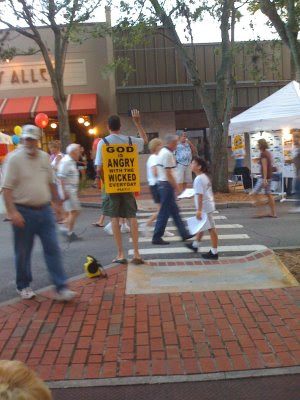 There was this old parable told by a Scottish preacher about a meeting that took place between two men that had been healed of their blindness by Jesus. Apparently, the former blind man from the healing story in John chapter 9 met the former blind man from Mark chapter 8 and they began to compare notes. The man from John 9 told his counterpart of the way in which he was healed. "Jesus spit on the ground," he said, "and then he took the mud he made and put them on my eyes. When I washed the mud off, I could see." He went on to assert that this was the only proper way to be healed. The man from Mark 8 pooh-poohed this concept and declared that the only true way to be healed was without mud.

Naturally they argued the point, and parted ways in anger. And naturally two Christian sects were born as a result.

It's funny because it's so like the way things really are.

The Apostle Paul wrote a letter to a group of Christians in the First Century and he told them, "Be completely humble and gentle; be patient, bearing with one another in love. Make every effort to keep the unity of the Spirit through the bond of peace." This is one of the passages in the New Testament that Christians put on greeting cards, but seldom adopt as a personal credo or a way of life.

Most church mission or purpose statements contain language and phrases that speak of reaching out to people, growing as a community, doing mission---the standard fair that you might find on any business card or law office letter head.

I wonder how many churches would just straight up adopt Ephesians 4:2 & 3 as their mission statement. Not many I am guessing. There are at least two reasons for this:

1) The word for "gentleness" that Paul uses here is makothumia. One way of translating this ancient Greek word is, "the spirit that has the power to take revenge, but doesn't." Imagine if Christians decided to leave vengeance in the hands of God. Imagine if Christians forgave one another with same neediness and urgency they seek from God. Imagine.

Here's the thing that everyone needs to understand: Unity does not mean conformity.

As a Christian I have a particular set of beliefs that I hold close to my heart. Some of those beliefs are different than the ones held by Christians that I don't necessarily agree with on a lot of issues. But some of them are the same. Walking hand-in-hand with someone doesn't necessrily mean that I am going see eye-to-eye with them.

I have to confess. I was not a big Jerry Falwell fan. I thought that when all was said and done, Falwell had done more harm than good to the Good News of Jesus Christ. He epitomized what I have been talking about here when I say that far too many Christians keep score, take vengeance, and don't "put up" with anyone who disagrees with them. But quietly, Fallwell had done a lot of reconciliation work in Virginia trying to do his part to bring races together. Albeit this was after initially supporting Segregation in the 1960's and encouraging people to pull their children out of public schools so they wouldn't be exposed to people with a different skin color... but still he came around to a point.

And I can claim that as a hand-in-hand moment.

The Body of Christ, as the Church is sometimes called, should be a diverse entity made up of people from all walks of life, every background, every race, gender, sexual identity, class, you name it. Jesus brought unity to the Church by uniting a motley crew of people around the central idea of his Lordship.

Jesus brought unity to the Church. It is up to us to keep it. And part of keeping unity means that we embrace BOTH our differences and our similiarities with one another, realizing that God is bigger than our descriptions and divisions.

IN FACT, Paul even lifts up this whole "unity in diversity" idea when he told some First Century Christians, "You are all given your own gifts of grace... some of you are called to be pastors and teachers and others are called to be prophets, leaders, supporters, activists, prayer warriors, servants..." I embellished a bit on Paul's list, but I imagine that he would agree based on what we know about what Paul thought on these kinds of things.

The purpose for all of these gifts of grace is not to lift up any one person, however, but for the benefit of the whole Church. When we use our gifts of grace for personal gain, for power, to achieve or suppor our own agenda, we do violence to the Gospel and to the unity established in the Church by Jesus Christ.

The ancient Christian theologian Chrysotom wrote, "[The Church] is a perfect union as though between limb and limb."

My son recently had to have surgery to repair a torn labrum in his shoulder. The offending body part is essentially a sack of gristle that surrounds the shoulder socket and keeps it in place--along with ligaments and other assorted stuff. When the labrum is torn away from the socket, bad things can happen and generally do. My son lost strength in his arm, and was in serious pain. He also would experience his shoulder dislocating over and over again because there was nothing to hold it in place. Surgery was required to cut away the frayed parts of the labrum, and then reattach it.

I noticed that when his shoulder was hurting before the surgery my son would overcompensate in ways that also caused him pain and discomfort in other parts of his body.
It makes sense, really.

When you exclude the one deep tissue massage that I got from a male, Russian masseuse named Anatoly, nearly all of the professional massages that I have received in my life have been pleasurable. But despite all of my desires to remain comfortable during a massage there is always a little pain involved if they are done well. Knots, adhesions and other assorted ickiness can make muscles sore and massage enables blood to flow through them properly and to heal.

I also know that when I am sore or knotted up in one area of my body, the rest of me suffers for it. And when I say the rest of me, I mean my mind, body and my spirit.

It's rather idiotic to not be aware of the damage that can be done by disunity in the Church. When one aspect of the Body is wounded or angry, it affects us all.

Our desire to be right all of the time.

Paul uses this cool word in his letter to the Ephesian Christians: aletheuo. It's usually translated "speaking the truth in love." But it literally means, "truthing in love."

Truthing. I love that. It turns truth into a verb-ish.

We need to be truthing people, who act out of love and not out of our own self-interest.

And we need to be reminded time and again that when we are doing our best to be truthing, loving people and to "put up with" our fellow Christians---they are more than likely "putting up" with us.
Apostle Paul emergent conversation emergent theology Ephesians first presbyterian church of eustis leon bloder presbymergent unity