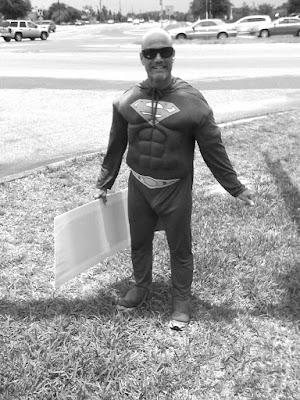 I was driving down the one decent four lane highway that cuts a swath through my little town, connecting it with some of the other little towns that make up North Lake County, FL, and eventually leading to Orlando and civilization.

That's not exactly need-to-know information, but perhaps it gives you an idea of where I live.

Oh, and by civilization, I mean anywhere where the Starbucks is not inside a Target. Check that. I consider myself blessed to even have a Starbucks in my little town. Well, technically it's in one of the little towns that the four lane highway connects with mine, but whose splitting hairs?

At any rate, there was a highway and I was on it.

So as I am driving, I see this bald guy wearing a Superman costume on the side of the road. And the bald guy in the Superman costume is holding a "T-Mobile" sign with an arrow pointing to the strip mall behind where he's standing. I deduced two things: 1) The T-Mobile store was undoubtedly hard up for customers and 2) The bald guy was crazy as a bedbug.

Naturally, I stopped. Well, actually I had to find a break in the median, do an illegal U-turn and then park in the McDonald's parking lot in order to stop, but I did.

I walked up to the guy who was dancing to Michael Jackson's "Billie Jean," and said, "Hey, can I take your picture?" He instantly whirled, lowered his sign and posed without saying a word. When I got the picture (above) he stuck out his hand. I shook it. He told me that his name was "Milano." I introduced myself and told him that I was the pastor of the First Presbyterian Church of The Next Little Town Over. He got excited, and told me the name of his church, which I promptly forgot.

I asked him, "How did you get this job, and why do you do it with such enthusiasm?" Milano told me that he was driving by and saw a guy standing on the side of the road holding the sign and doing a lackluster job of drawing attention to it. "The guy was lame," Milano informed me. He said that he went into the T-Mobile store and told the manager that he would do a better job. The manager hired him, Milano told me, on the spot and fired the other guy. "I love this!" he exclaimed. I told him that he was going to be in my sermon illustration. He got even more excited. "That's awesome!" he bellowed.

A few moments later as I was waiting for the stoplight to change at Milano's intersection, I saw him dancing and pointing suggestively to a pickup truck full of Latino men. They laughed. People were blowing their car horns as they drove past Milano and he literally leaped over a cement pole and waving and shouting with glee when he heard it.

I had to ask myself, "What would it take for me to dress in a Superman costume and wave a sign on the side of a busy street?" Milano was doing it for minimum wage. And he loves it. He does it better than anyone. All day.

What do people see when they look at most Christians, I wonder. Do they see a bunch of people standing around, waiting for the next thing or do they see people who are willing to don a Superman costume and dance to Michael Jackson in the street?
emergent church emergent conversation emergent theology leon bloder Pentecost presbymergent Presbyterian Church (USA) Superman