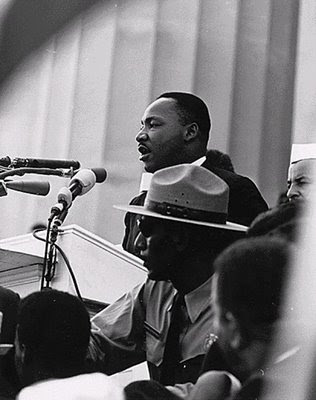 This past week marked the 40th anniversary of the assassination of the Rev. Dr. Martin Luther King, Jr. The night before Reverend King was killed, he delivered his final sermon, which was strangely prophetic. "Like anybody I would like to live a long life," Dr. King preached. "Longevity has its place. But I am not concerned about that now. I just want to do God's will. And he has allowed me to go up to the mountain, and I have looked over, and I have seen the Promised Land."

I was an infant, not even five months old, when Dr. King was struck down by assassin's bullet outside of his Memphis hotel room. In my lifetime we have gone from that moment of national tragedy and shame, to one of celebration (despite party affiliation) and pride with the election of our country's first black president, Barack Obama. Someone said that Obama's election was the "down payment" on Dr. King's dream.

Dr. King once said, "Darkness cannot drive out darkness; only light can do that. Hate cannot drive out hate; only love can do that. Hate multiplies hate, violence multiplies violence, and toughness multiplies toughness in a descending spiral of destruction....The chain reaction of evil--hate begetting hate, wars producing more wars--must be broken, or we shall be plunged into the dark abyss of annihilation." (Strength To Love, 1963)

Some times one of the most dangerous things that you can do is to go to people and tell them that all their accepted ideas and ways of doing and thinking are dead wrong.

This Sunday is Palm Sunday. I have been reading and re-reading the account of Jesus' triumphant entry into Jerusalem in Mark's Gospel all week. It's been unsettling. The scene itself seems more grotesque than triumphant to me, since we're being honest.

It's Passover: a time when pilgrims were entering Jerusalem in a steady stream and being greeted with shouts and acclamations from the residents and the pilgrims who had already arrived. Suddenly Jesus rides slowly into Jerusalem on a donkey while his disciples go before him shouting and throwing down their coats. People take up the cry and begin to wave palm branches and get into the spirit of the thing. "Hoshi-anna!" they cry out. "Hoshi-anna!" The cry of the disciples becomes easier for the crowd to understand, "Blessed is he who comes in the name of the Lord!"

The phrase "he who comes," was one that pointed directly toward the Messianic hopes of the Hebrew people. The Hallel, Psalms 113-118, were sung during Passover, "Open to me the gates of righteousness, that I may enter through them and give thanks to the Lord..." The Psalms speak of restoration, of God setting things to rights for God's people. During the Passover, nationalistic feelings ran high, and the hopes for a restoration of the Davidic kingdom were quite literally on the lips of every Jewish celebrant.

The cries of the disciples are taken up, and the crowd really begins to get into it. "Hoshi-anna! Blessed is the one who comes in the name of the Lord! Blessed is the coming kingdom of our ancestor David! Hoshi-anna, O You that dwells in the Highest Heaven!"

Nearly 200 years earlier Psalm 118 (a song of victory) was written or expanded after the victories of Judas Macabaeus over the Syrian king Antiochus. Antiochus briefly conquered Palestine in 167 B.C. and essentially made it illegal to be Jewish. No one could possess a copy of the Torah, or circumcize infants upon pain of death. Antiochus defiled the temple, even going so far as to offer swine flesh on the altar as he sought to force the Jews to adopt Greek life and religion. The temple was surrounded by brothels under the rule of Antiochus, and all manner of revilery took place in and around what had once been the center of Jewish life and faith.

Judas Macabaeus, a leader of Jewish rebels, drove out Antiochus after a series battles and eventually was able to re-purify the temple. Psalm 118 took on new meaning as it was sung--honoring Judas' great victories, and celebrating God's favor of God's people.

Under the thumb of the Roman Empire, many Jews were beginning to feel as though their identity as a people was beginning to be eroded. The pro-consulate, Pontius Pilate had placed images of Caesar in and round the Temple--which had caused an uproar. He had also used money that had been collected for the Temple tax to build aqueducts. The economy was in a shambles. Taxes were high. Inflation was out of control. The religious leaders of the day had taken refuge in collusion with the Empire, taking advantage of the very people they were called to lead.

I believe pretty strongly that Jesus coordinated this whole thing. As I was reading over the passage this week, I wrote in large sort of scary letters in my notes, "THIS WAS NO ACCIDENT!" Which makes it even more beautiful, I think. Jesus planned an act that was so threatening, so bold and so confrontational that it would not be ignored.

He rode into Jerusalem while his disciples chanted the Hallel. He rode in on a donkey, a symbol of peace, a symbol of humility. If a conquering king wanted to assure the peoples that he had just conquered that he meant them no harm...that he would not raise arms against them...that there would be no war...he would ride into the city on a donkey as a sign of peace.

Even as the people waved their plams and shouted they would have had reason to be troubled by the sight of Jesus. What they craved was redemption and restoration from the sorry state of affairs they found themselves in. They assumed that the only way to accomplish this was if someone would fight for them. They hoped that God had sent them another David, another Judas Macabaeus.

Instead, they were met with a poor Nazarene on a donkey.

The word "Hossana!" which I have been writing out phonetically "Hoshi-anna!" is not necessarily a term of honor. I know that for most of us Christian-types it sort of takes on that role in our songs, hymns and such. But it's not a term of praise.

The people who met Jesus as he rode into Jerusalem were crying out to God, "Save us now!" But when salvation came, they rejected it. It was too demeaning. It wasn't grand enough. It wasn't noble enough. There was to be no great hero who would restore everything the way it had been when times were better, when money was good and when the nation was powerful and great.

And so they went on crying "Hoshi-anna! Hoshi-anna!" Never knowing that God was hearing, God was moved, God was answering their prayers...

Sometimes one of the most dangerous things that you can do is to tell people that everything they have been thinking, being, doing... is wrong.
emergent church emergent conversation emergent theology Jr leon bloder Martin Luther King Palm Sunday presbymergent presbyterian Presbyterian Church (USA)