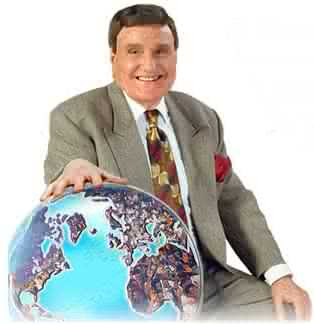 When I was in high school there was this televangelist by the name of Ernest Angley who I used to watch sometimes when there was nothing else on TV.
Wait. That was a lie. I used to watch him because I was fascinated by him. It was like watching a train wreck happen in slow motion. Ernest is a faith healer. I say “is” because he’s still at it. I just looked him up on the Internet and found that he has some “Cathedral” where he still holds his services, and apparently now sits atop some sort of mini-empire of faith healing.
I just remember him walking down a spiral staircase in the opening of his show, wearing a white suit and talking about how God gave him some Abrahamic vision that he was going to heal as many people as there were stars in the sky.
Oh, and he would stretch out his hand and say dramatically, “Put your hand on the television screen... HEE-UUUUHLLL! HEE-UUUUHLLL! HEE-UUUUHLLL!”

Once when there was no one around, I crept over to the TV and put my hand on Ernest’s as he chanted “HEE-UUUUHLLL!” and waited for something to happen. I had a slight headache that day that cleared up about an hour later, so I guess that was something.

But my legally-blind right eye remained legally blind. It was too much to hope for, really. God would have had to work really hard to heal the damage that had been done to my eye. I guessed God didn’t feel up to it that day.

It’s amazing that we keep our faith, you know? What with all of the disappointments and unanswered prayers. And all of the pleas for healing that seem to go unnoticed. Then there are the people like Angley who make all of these outrageous claims and then when nothing happens, they chalk it up to unbelief. I’m not surprised that people find Christianity so difficult to understand and even more difficult to follow.

I mean, I have met people who have experienced the kind of miraculous healing that cannot be explained. My aunt was healed of a strange brain disorder in a way that defied scientific explanation. A friend of mine in seminary swore to me that he saw his arm, which, because of a birth defect, was shorter than the other, grow in front of his eyes.

Fore every 1,000,000 imposters and fakes, there seems to be at least one or two who have experienced the real thing.

How? Why? What makes them so special and the rest of us, not so special?

My aunt, who experienced healing had a friend at her church who was dying of cancer. The friend asked her, “Why did you get healed and I didn’t? Why wouldn’t God grant me healing, too?”

Maybe healing is a whole lot more complicated than that. Could it be that God’s idea of faith, and timing and all of the rest of it are far different from ours? What if healing was so much more holistic and interconnected than we could ever imagine? And what if it required some stuff on our part---like a willingness to accept Divine healing in whatever form God has ordained for us?

And what if sometimes that willingness looked like repentance?

I’ve been reading the lectionary text for Sunday from Acts chapter 3. It’s the passage where Peter just flat out preaches his you-know-what off to the people who are gathered in the Temple. And he does it right in front of some of the very people who falsely accused Jesus. He does it right in front of the religious leaders who colluded with the Roman government to execute Jesus.

Here’s the awesome part of this whole thing. The reason Peter had their attention was because he had just straight up healed a man who who had been unable to walk for his entire life. The guy was a beggar who positioned himself in front of the most traveled through gate leading into the Temple. For 40 years the guy had been begging in the same spot. The gate (called Beautiful) was in front of some steps that led into a courtyard where Gentiles and those who were considered unclean were not allowed to set foot.

Guess which kinds of people were also considered unclean and unworthy to receive the grace of God? Yeah. People who were handicapped from birth.

So this guy positioned himself at the busiest place to enter the Temple and because it was considered honorable in ancient Jewish Temple culture to give charity to the poor and the downtrodden (even though you wouldn’t allow them to experience God’s grace), he probably made enough to survive. And everyone who had gone in and out of the Temple through that very gate knew the guy by sight. Many of the people standing in front of Peter at the moment in question had undoubtedly given the ex-handicapped man some alms. Or not.

Peter uses the moment of healing as a witness to the power of the Resurrection. And then he turns it into a referendum on the healing that needs to take place in the hearts of those who are hearing him. True healing, Peter proclaims, cannot take place without a repentant and submissive spirit. The crowd in the Temple is confronted with the reality of their actions, the consequence of their inner illness and then given the remedy. “Repent, and turn to God...”

How often do we come to God craving wholeness, but only on our own terms? our own time? our own way? The only faith that the man at the gate had was the faith of an empty hand. When he stretched it out to Peter, he opened it up willing to take whatever it was that Peter would offer.

Are we willing to submit ourselves to the healing that God wills for us?

Are we ready to repent of our own willfulness and open ourselves up to the unexpectedness of God’s grace--regardless of its form? Are we ready to stand up and walk (physically, spiritually or otherwise) in the name of Jesus?

Are we ready to accept God's timetable? Here's something that's worth pondering. Jesus would have walked through the Beautiful Gate to go into the Temple at least once, perhaps more. As he entered with his disciples, Jesus would have walked right past the handicapped beggar--and he didn't heal him. Maybe he even looked upon him as he walked by. Maybe Jesus motioned to Judas to give the beggar some alms, since Judas was the disciples entrusted with their money. But he didn't heal him.

It wasn't time. The man was destined for healing, but his healing was timed perfectly to bring glory to God, and to proclaim the Resurrection of Jesus and the coming kingdom of God.

I find that in part I agree in principle with good old Ernest Angley, it does take faith for healing to take place---the faith required to extend our empty hands, and know that nothing and no one can lift up us like Almighty God. The faith to know that in life and death we belong to God. The faith to know that in God's time, in God's way and all to the glory and honor of God through Jesus Christ by the power of the Holy Spirit (that preaches) we will be made whole.
emergent church emergent conversation emergent theology Ernest Angley first presbyterian church of eustis healing leon bloder presbymergent presbyterian