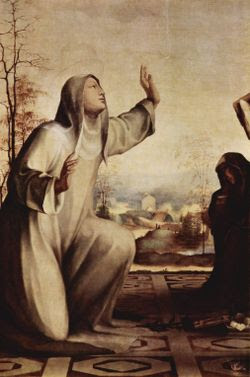 Today is the feast of St. Catherine of Siena. I wouldn't have known this, except I heard it on a podcast that I subscribe to that tells me about these kinds of things. It also plays beautiful music and there are people reading Scripture with beautiful accents from all over the United Kingdom. The podcast is called Pray-As-You-Go, and you should definitely check it out.

When I arrived back at my office, I dutifully looked up St. Catherine of Siena, and I found this prayer, which I will relate in part:

O blessed Catherine, turn thy benign countenance towards me, who confident of thy powerful patronage call upon thee with all the ardor of affection and I beg thee to obtain by thy prayers the favors I so ardently desire (mention your request). Thou wast a victim of charity, who in order to benefit thy neighbor obtained from God the most stupendous miracles and became the joy and the hope of all; thou canst not help but hear the prayers of those who fly to thy heart - that heart which thou didst receive from the Divine Redeemer in a celestial ecstasy...

According to the legends, St. Catherine devoted much of her early service to the poor, but turned her attention to lobbying for reform among the clergy. She died at age 33 on April 29th. I thought the above prayer was fascinating. St. Catherine is addressed in this prayer as a "victim of charity." I get what is being said, mind you, but it's a strange choice of words. "A victim of charity, who in order to benefit thy neighbor obtained from God the most stupendous miracles and became the joy and hope of all..." A strange prayer, indeed.

Interestingly, the passage of Scripture that was read on my podcast was from the Gospel of John. Jesus spoke to the crowds, "I am the bread of life, whoever believes in me will never be hungry..."

I am a firm believer that God meets us in the midst of our wandering. I tend to wander a lot. Sometimes I am aware of the presence of God, and the ways that God is trying to teach me in my lostness, but most of the time all I get are vague impressions of the Divine.

I feel like God is trying to show me something today through these passages of Scripture, St. Catherine and the recent actions of my church Session (board of elders). Yesterday the Session of the church where I am the pastor, voted unanimously to launch a Soup Kitchen and to begin a ministry of feeding hungry people. I could tell that some of them were scared of this. But they voted in the end to do what was right instead of what was safe and convenient. There may be some folks who will waver as we move forward. Someone told a story about how one of the larger churches in our area was struggling to keep their homeless shelter (the only one in a 25 mile radius) open because of increased demand and lack of donations.

I quietly suggested that now was probably the best time for us to do something, anything to help.

The Christian traditions that I was raised in (Baptist, very conservative, evangelical) loved to lift up passages of Scripture where Jesus declared things like "I am the bread of life." That's pretty much where their theology began and ended. Getting people "saved" was the most important aspect of their purpose on earth. When it came to answering questions of poverty and hunger--all of the answers were colored by their desire, their need to do evangelism first and foremost. If feeding a hungry, homeless person got them in the door, then so be it. They would be fed, but by God they would have to listen to the Gospel before they ate. I remember as a teenager going to a homeless mission run by fundamentalist Christians in Denver. CO. The homeless folk would shuffle in from the street, most of them dirty, many of them drunk, all of them hungry and cold. They would be forced to sit and listen to a 40 minute sermon on getting your heart right with God, and then they would finally be allowed to eat. It was the price of admission, and everyone knew it.

I wonder if they felt like victims of charity.

I don't know where this journey that we voted to begin will take my church. I do know that we decided a few things from the outset. We would never turn anyone away, and we were not there to try to preach to people. We would just feed them.

When we become Jesus for people, when we live out the mystery and the wonder of the Incarnation we preach the Gospel louder than if we ever used words. We embody the passage of Scripture in John's Gospel where Jesus proclaimed that he was the "Bread of Life."

We should be inspired by the witness of St. Catherine on this her feast day. She began by working with the poor and giving herself away, but then soon realized that the Church needed a conversion more than the poor that it was supposedly serving.